At about the same time of 2010, two new restaurants opened up in San Francisco: Prospect and Wayfare Tavern.  For a couple of months, I heard mixed reviews on both of these places; some people loved or hated Prospect and most seemed to really like Wayfare Tavern.  Owned by Chef Tyler Florence, Wayfare Tavern has a solid location in the Financial District.

So, in September, my friends Rick and Lillian took me to dinner at Wayfare for my birthday.  What ensued could be described as nothing less than an eat-fest w/ extraordinarily comforting, simple, plentiful and delicious food.  I left that night thinking this just might be my new favorite “semi-fine dining” restaurant in the city.

(Note: It’s a rarity but on this visit, I neglected to take my camera w/ me on the first visit so all photos are credited to the photographer – my friend Rick!)

Walking into Wayfare, you notice that the aura is pretty casual.  The cost of the meal leans closer towards actual fine dining but the location and fare retain the pub feel and atmosphere; all of it leads to a rather unpretentious and comfortable mood.  The first floor is the bar and lounge where patrons can access the entire menu is a completely casual setting, and the second floor is the dining room.  The dining room is noticeably more formal, but maintains warmth and charm in an old-world kind of way.

Service on this evening was kind and attentive. What it lacked in efficiency from our female server, she made up for in friendliness and we were tended to for the evening.

After we sat down, Rick picked a terrific bottle of Zinfandel, if I recall correctly.  We then proceeded to order virtually everything on the menu; well, we tried anyway.  Speaking of the menu, Wayfare Tavern has an expansive menu that reads beautifully.  You truly end up wanting to try one of everything.

Here are some of the items we ordered (all photos by Rick Kim):

The steak tartare was exquisite.  It was prepared and seasoned well, but with the toast, it just became divine.  I simply had to order the “Grilled Alaskan Salmon with Uni Butter” solely because I am not sure how one doesn’t take the opportunity to consume “uni butter”.  On this note, we also shared an appetizer (one of three!) that consisted of fresh uni atop a cauliflower ricotta pudding.  The creaminess of the uni was carried over to the pudding via the ricotta, but the cauliflower balanced out the dish from becoming too creamy and threw in the right does of “fresh” into this dish.  Again – divine.  Lillian ordered the Lobster and we all took a bite out of it, and had to restrain ourselves from just snatching the dish away from her.  The lobster was chilled and as fresh as it could possibly be.  The last entree was the lamb, and while the flavor was good, I preferred it a bit less cooked than it was on this evening.

With a dessert served with “Happy Birthday” written on it, courtesy of the kitchen, our meal hovered dangerously close to perfect.

Fast forward four months and I revisited Wayfare Tavern – and this time, with my camera in tow.  On this evening, Mr. K and I would finally be having dinner w/ Mike K; we’d attempted (and failed) to schedule this group dinner for a couple of months due to schedule conflicts.

I was thrilled to be revisiting because ideally, I’d like to visit a place at least twice before reviewing in a positive fashion so that I can be assured of consistency.

This time, we had to wait about 10 minutes to have our reserved seating open up.  This time, our male server left much to be desired.  It wasn’t bad service, and we got the things we needed — but what he lacked was some element of personalizing the server-customer relationship.  He simply did what he must, and that was that.

We started the meal with hot, crispy-on-the-outside and soft-on-the-inside popovers, served with butter.  These were as good I remembered them to be.

But looking over the menu, I noticed a distinct change — where are the daily specials that used to exist at the bottom of the menu?  On my last visit, the specials consisted of comfort foods like meatloaf, soft shell crabs and pork ribs.  This portion of the menu was taken off and daily specials were no longer being offered.

Off the regular menu, our group ordered the Beet Salad w/ Housemade Ricotta (pictured to the left), “Devils on Horseback” which were California dates wrapped in smoked bacon for our appetizers.  The beets were terrific, but the housemade ricotta tasted much like burrata cheese, which I tend to be a bit finicky about.  The Devils on Horseback were good — but while I chewed on it, I did begin to think that the start to this meal was not as       extraordinary as my first meal at Wayfare Tavern had been.  Forgetting about the different server and basing this solely on the food, I was less impressed overall, at least thus far.

Then we ordered our entrees for the evening:  Braised Beef Shortribs with potato puree, Hangtown Fry (also known as “a dying man’s last meal”), and my order, which was the Sonoma Pork Belly with Beluga lentils and candied rutabaga.  One of the perks of having a restaurant review blog is that everyone will offer you at least a taste of their dish, so I tried all of it. 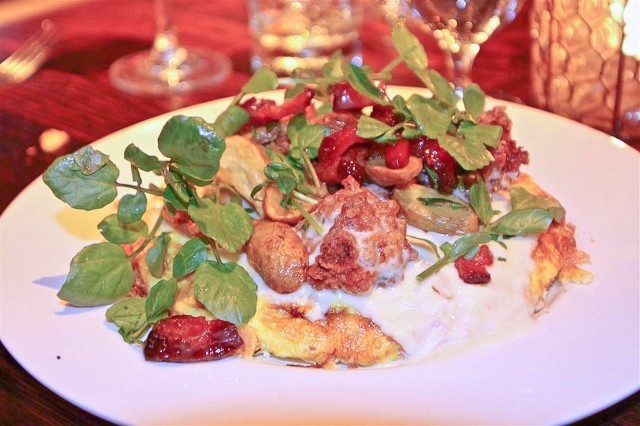 This dish is a mixture of Petaluma eggs with oysters, bacon, mushrooms, cheese and watercress, served with potato hash.  While the menu read “a dying man’s last meal” – I will not here that a dying man’s last meal is slightly different than a dying man’s last wish for a meal.  While Mr. K reportedly enjoyed it, I found the eggs to be dry and overall, the flavor, despite the numerous ingredients, to be a bit — boring. 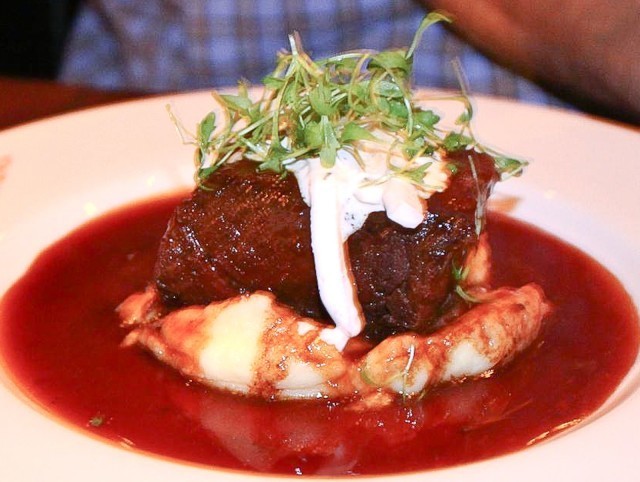 This was a relatively substantial portion.  The meat was well-cooked, and the flavors were lively and full.  It tasted very good overall, but once again, it wasn’t impressive; it was just good.

The Pork Belly was well-cooked also, and very soft.  Combined with the lentils, I found this dish to be small but filling.  The server had informed me that the dish is served with fresh-made potato chips, but I’m not really sure what these added to the dish.  I would much rather have had a potato side or even wild rice on the side rather than the chips.

Being a Macaroni and Cheese lovers, we opted to try Wayfare Tavern’s as well.  I really liked that they used one cheese; it was baked with breadcrumbs on top and a smoked olive oil mixed in.  This dish was quite good but restaurants like Globe and Q make a better Macaroni and Cheese.  I like the pasta cooked less and more cheese, less oil in a good mac and cheese.

I’m not sure what to make of my two experiences here.  It’s rare that a restaurant will be give me a stellar experience and then give me a rather mediocre food experience.  But I am also adamant that without consistency in flavor and taste, a restaurant becomes something that can’t be readily recommended.  As someone who cooks often, I know that food sometimes turns out fabulous and some other times, the same dish I thought I cooked so perfectly turns out to be ordinary, or sometimes even inedible.  But that’s why I don’t own a restaurant.

While my second visit to Wayfare Tavern delivered good food, it simply wasn’t great food.  Granted, we ordered completely different food, and perhaps everything we ordered on our first visit were the topnotch items at Wayfare Tavern?  I can’t be sure.

But I do know that people rave about the burger here.  One day, I’m going to go back to try the burger.  On that visit, I’ll stick to ordering the lobster and beef tartare, though.

Wayfare Tavern is located at 558 Sacramento Street.  They are opened from 11:30 A.M. to 11:00 PM on weekdays, and only for dinners on weekend evenings, starting at 5 P.M.  They offer valet parking in front for a nominal fee of $10.