There’s a huge undertaking in San Francisco called “La Cocina”–an incubator kitchen of sorts that provides commercial kitchen space and assistance to folks. The majority of the those receiving help from La Cocina are low-income women who had a big dream and huge talent. But La Cocina is more than just an incubator; it provides an outlet for these new businesses to network, and gain wide popularity in the region, and with partners like Whole Foods, some of these businesses gain nationwide visibility. In addition to providing assistance to the food entrepreneurs, less known are the myriad of workshops and culinary classes that La Cocina hosts throughout the year. Covering topics like “Retail 101: How to Pitch Your Business to the Right Market”, “Bags, Bottles and Boxes: The Quest for the Perfect Package”, and “Holy Mole” — a class taught by La Cocina entrepreneurs teaching the art of making Mexican mole, the organization is  chock full of informative and relevant workshops that cater to much more than just food businesses.

For the fifth year in a row, San Francisco is home to the “San Francisco Street Food Festival”  on August 17, 2013. It’s an opportunity that gives regular folks like you and me access to the fascinatingly delicious creations La Cocina businesses prepare. Some of the businesses are well-known and already established; others will be brand new–but everything presented is fresh and a delight to the senses.

Last night was the “Media Dinner” for San Francisco Street Food Festival, a preview to the upcoming food festival and the vendors of the “Night Market”, a fundraiser for La Cocina, happening on August 16, the night before the food festival kicks off. Held at Fort Mason, it was food and drink overload upon walking in. While I was checking in for my badge, a server came by and offered me a glass of Chardonnay. (“Don’t mind if I do, thank you.”)

As I walked in, I was greeted in the front with a variety of alcoholic drinks provided by Rye, beautiful and plentiful–and strong, as I quickly found out. I did make it a point to try two out of the three drinks offered–you know, just so I could tell my readers they were good.

From there, the food stations took over.

Now, I’m not inexperienced when it comes to food events, so I knew better than to eat the entire small portion served by each stand. This ain’t my first food festival, folks….right? I took a bite, sometimes ate half of it, and tossed the remainder. My objective was clear: try all of the food, and take photos.

That plan did not work out so well.

First, I get there and my favorite lens, which had been giving me trouble recently, decides to not work at all. Thankfully, I brought a backup lens that I don’t much like–so I was able to shoot photos of each dish I did try. That said, be forewarned, I didn’t even come close to trying all of the food.

Homemade thick tortillas are the foundation for the juicy and flavorful toppings piled on top, of stir-fried  nopal cactus, and ground pork, topped with some fresh cream. Both of these were packed with flavor–and dare I say it, the cactus was even better than the meat-topped one. El Pipila had two salsas available to top these creations with, which I gladly did.

There were quite a few tamales available from different vendors. You’d think after one or two, you might be done tasting tamales but on the contrary, each had their one unique take on it, differing in which flavor was highlighted as well as texture and presentation. Some were meant to be consumed with sauces whereas Estrelita’s Cafe presented theirs as-is. Doing so really gave credit to the smooth corn and the subtle taste of chicken. I was unable to try the veggie or cheese ones—despite popular belief, there is a limit as to how much I can eat and stomach space was prime real estate at this event.

Love & Hummus was presented as one of La Cocina’s success stories at this event. Deservedly so, too, as they are now carried at Whole Foods and many other retailers in California (click here for all locations). The organic hummus manages to impress without a drop of olive oil. Using toasted tahini, this hummus tastes clean, fresh and light, unlike many hummus we have grown to know. The buttery texture is pleasant. In contrast, the Muhamara Hummus, also organic, packs a nice kick in the beginning but finishes very subtly with flavors galore, interchanging between the freshness of pomegranate, deep tones of walnuts and the bright notes of roasted red bell peppers.

As a marketer, I also have to add that their branding is quite refreshing, cute and memorable, almost like the Gymboree or Jamba Juice of hummus. It’s a nice addition to  the San Francisco Street Food Festival.

As someone who would crumple up and die without meat, I limit how much vegan stuff I will try. That said, most of the things I have tasted have not been bad. Walking by “Hella Vegan Eats”, I couldn’t help but notice the pretty little concoctions laid out in front.
“Donuts?” I asked.
“Yes…with beet patties.”
At first, I experienced some hesitation. But I snapped the photo and then took it to a table to admire; my photos don’t do this thing justice. I took one bite as-is, and not being a donut fan (or particularly keen on sweets in general), I wasn’t sure if this was lunch or dessert. I removed the beet patty and took a bite of that with the pickled vegetables and have to say that it was quite satisfying. The texture of chewing a real beef patty is mimicked, but the oiliness and heaviness of beef is removed. The beets and what appeared to be long-grain rice offer very mild flavors which helped to highlight the flavors of the onions and greens also included.

I could dig this. 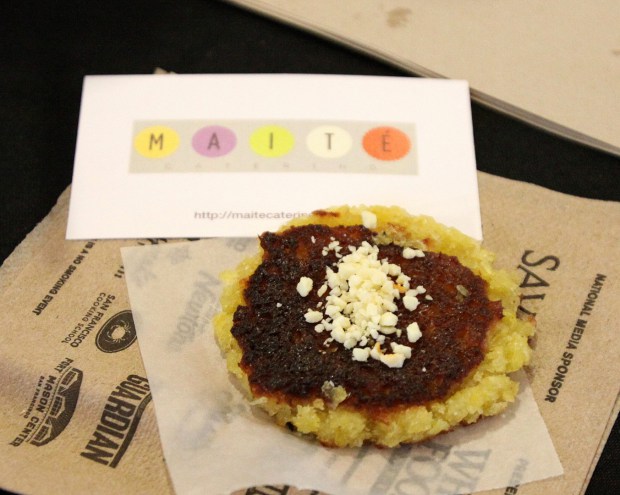 While I was working my way through more food, and beginning to experience food coma while standing up — a representative from “Maite Catering” came by with freshly prepared, piping hot “pancakes” called Arepas. She offered me one, which I gladly accepted, along with a business card. One bite and I was hooked–oh, the flavors of coconuts and butter! You can’t fool this palate….

Later, I’d be walking by their stand and asking the proprietor how this was made. She’d inform me there’s not a single sliver of coconuts in here and it is 100% corn arepas.
Frankly, the whole thing becomes more fascinating because I would swear up and down —  there are coconuts in this thing.
Anyway — delicious, fried goodness.

By this point, I would pay someone to let me lie down and vegetate. I’m so full and I’m not even halfway through one of two rooms.
But did someone say “soul food”? And “buffalo chicken”?
Obviously, I can’t say no to that, so I took a bite of this gorgeous and simple burger. The chicken is deep fried and heavily seasoned and the slaw is cold and much simpler–providing a nice accompaniment to the meat. Chef Zella’s cooking is available at Whole Foods – Noe Valley in the hot food bar—and Zella’s Soulful Kitchen is ready to cater your next event.

A lot of the businesses that would be at the Night Market were located outside the two rooms being used for this preview dinner, and slowly, but surely, I was trying to make my way out there. Suddenly, I spot what look like Asian dumplings, called “momos” (Nepalese dumplings), prepared by Bini’s Kitchen. They’re like Shanghai dumplings, except the wrap is more doughy like pasta, and it’s slathered in a fragrant and slightly spicy tomato and cilantro sauce. One was vegetable and the other meat; I was offered one of both and while both were delectable, I actually loved the vegetable momo more! (Or… mo’ mo’ mo’?) 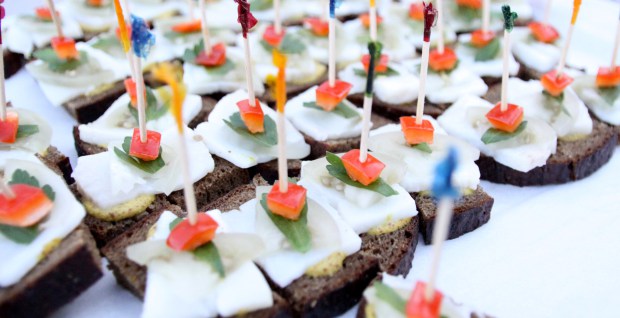 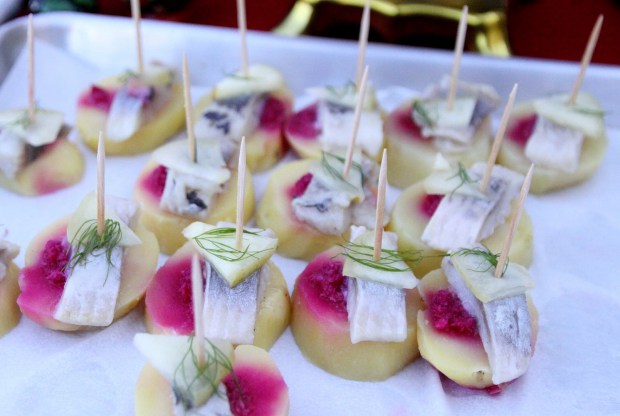 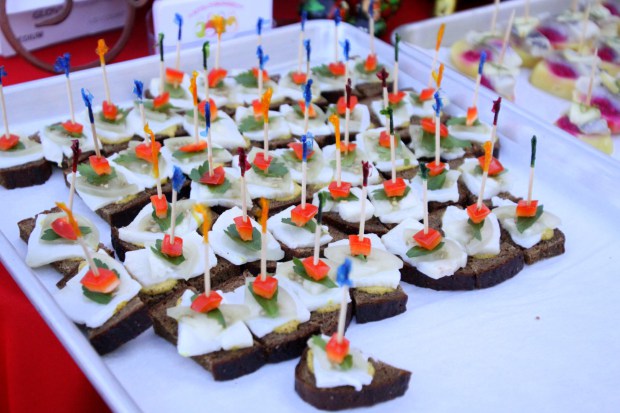 And last, but nowhere near the least, was what was my favorite from all the ones I got to try at the preview dinner. Made by Anda Peroshki, Chef Anna is my type of woman. First, she insisted I have to take a shot of vodka before tasting her small bites. (You don’t need to tell me twice. Chilled vodka, down the gullet.) Then she offers a taste of her food, called zakuska — what she describes as vodka-chasing snacks. There’s a cured fish (was it herring….and forgive me, by this point of the evening I am many drinks in) with a beet concoction, topped with a fermented apple atop a perfectly cooked piece of potato. I cannot get enough of this dish, and if Anna made me drink a vodka each time — I would have, just to get one more bite. Next to it was a pork fat, parsley and tomato concoction on top of rye bread — and while anything “pork fat” would always reign supreme, and as delicious as it was — I could eat the potato-fish-beet zakuska for the rest of my life and want for nothing more.

There was at least 15 other vendors I didn’t get to try.
Suffice to say that I did not taste anything bad at this event–all were good to fabulous, and all were the result of La Cocina supporting these entrepreneurs. 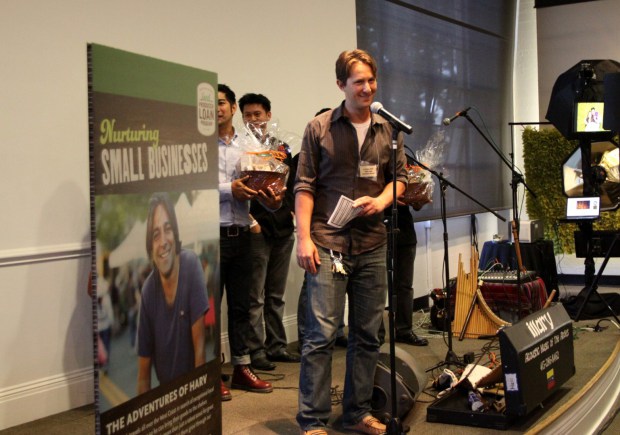 Caleb Zigas, executive director of La Cocina and major sponsor, Whole Foods, took the stage presenting the winners of the Local Forager Contest. (The worthy winners are listed out on the linked page.) All of them, to my understanding, will be present at the Street Food Festival. What a great gathering of local cooks who dared to dream bigger, and have now won the chance.

The San Francisco Street Food Festival will be held on August 16 in the Mission district of San Francisco, taking over a good portion of the area. (Direction are here.) For those in the know, hitting up the Night Market is highly recommended as this year, it will not only be filled with food and drinks, but games from six different regions of the world. This is a ticketed event and tickets should be purchased early as the event does have a maximum capacity.

I, for one, am going to practice marathon eating between now and then. Despite my best efforts, I failed to try a bite of everything and this cannot happen at the real event.

Special thanks to Amy Sherman for the invite — my waistline thanks you, too.

All of them, to my understanding, will be present at the Street Food
Festival. What a great gathering of local cooks who dared to dream
bigger, and have now won the chance.