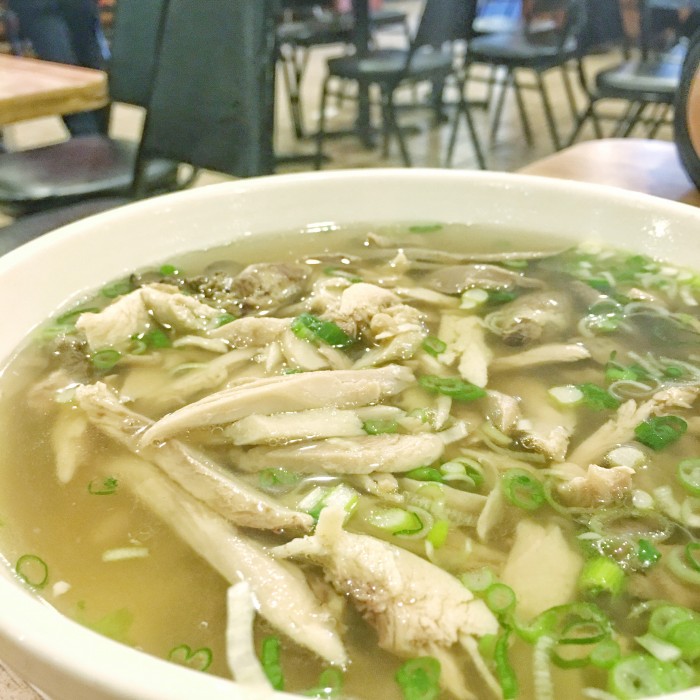 I’m not hungover. Frankly, I should be hungover to review this restaurant because the food here is phenomenally delicious when hungover and you can hear angels sing when you take one sip of the soup.

But today is a special day. Special, because (1) I’m eating pho when not hungover, sick or freezing cold, and (2) it’s my commemorative MOBILE BLOG POSTING!

In all of the years I’ve written about food on SF FOOD, I’ve never posted from my phone; I always waited to go home, process my photos and then use the desktop in my office to post.

But there’s an issue with that practice. Usually, everything gets delayed by days because processing DSLR photos in and of itself takes awhile, and add to that my amazing procrastination, and some photos never see the light of day.

So today, I’m using my iPhone 6S Plus to take the shots. (Alright, it’s also because I didn’t bring my camera since I didn’t intend to eat out today, but that’s a good enough reason to enter the 21st century.) The point is that I’m writing this in the car on my way home from the restaurant and using my mobile photos to do so.

It’s a good time to be alive.

So, let’s get down to business.

Pho Ga Huong Que Cafe opens at 9am so at this early hour, it was on a short list of places that served hot Asian food. When you enter, it’s a pretty spacious restaurant, but as grungy and run down as you’d expect from a pho restaurant. The tables are spaced apart nicely but are all usually a tad sticky, but I’ve normally found the utensils on the table to be cleaner than the norm, at least in appearance. 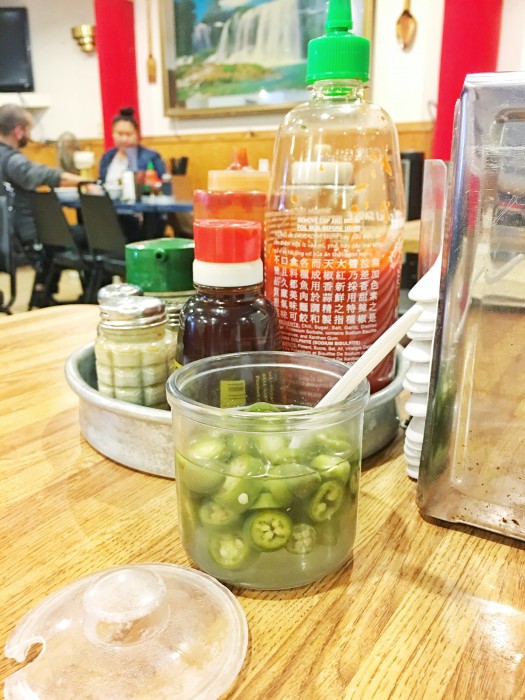 The first time I came to this joint was with a friend who knows Oakland much better than I do. I wanted Turtle Tower but didn’t feel like heading into San Francisco, and he said there’s a place nearly as good with what I believe he said was “magic sauce.” I do believe I was quite hungover that day…and the whole meal was magical! 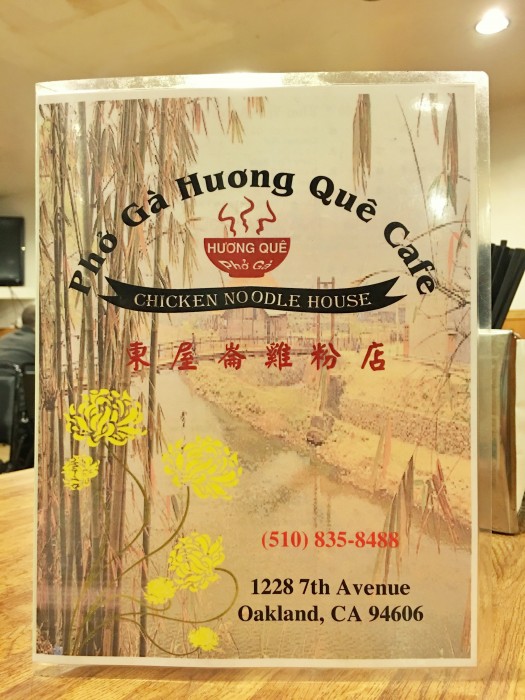 I’ve been back a few times for brunch or lunch over the years and always order the same thing: #8 “Chicken pho with intestines.” Now before you wig out about intestines, at Pho Ga Huong Que Cafe, intestine consists of only thinly sliced gizzards, some yummy chicken hearts and a couple of chunks of overlooked liver. No real intestines of any kind…but anyway. Combined with shredded chicken, you have your choice of noodles ranging from egg to thin rice noodles, but anyone who knows anything knows pho ga has to come with thick rice noodles. 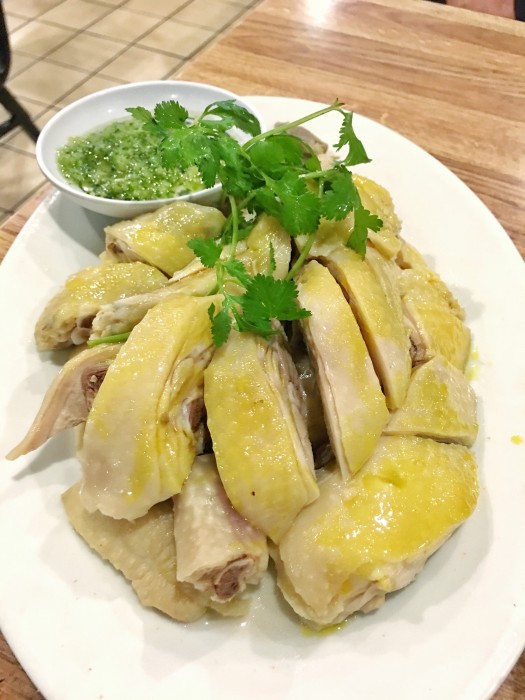 But at Pho Ga Huong Que Cafe, the real highlight is the other essential order: boiled chicken. Available as a 1/4, 1/2 or full chicken platter, the dish has a slight flavor of some milder spices (turmeric?) but is otherwise boiled chicken that is then dismembered into pieces for easier consumption and sharing. Well, to be clear, I am hoping it’s something like turmeric because this chicken is quite yellow AND the yellow comes off. So God willing, it’s some kind of spice. But you know what—if it’s delicious, I don’t actually care what is rubbing off the chicken. I’m chill like that.

As someone who devours boiled chicken on a weekly basis, nobody needs to sell me on the merits of a well-boiled chicken. But at Pho Ga Huong Que Cafe, it’s the sauce that comes with this dish that makes this boiled chicken hover close to greatness. It’s a mash of ginger, scallion and garlic–a combination I use often at home, but mine doesn’t taste quite like this, so I suspect there’s something else special about it.

You take a piece of boiled chicken, slather it in this concoction and just shovel the whole thing in your mouth. The subtlety of boiled chicken combined with the more pungent but oiliness of the sauce is divine. Consider it a Vietnamese chimichurri of sorts…. 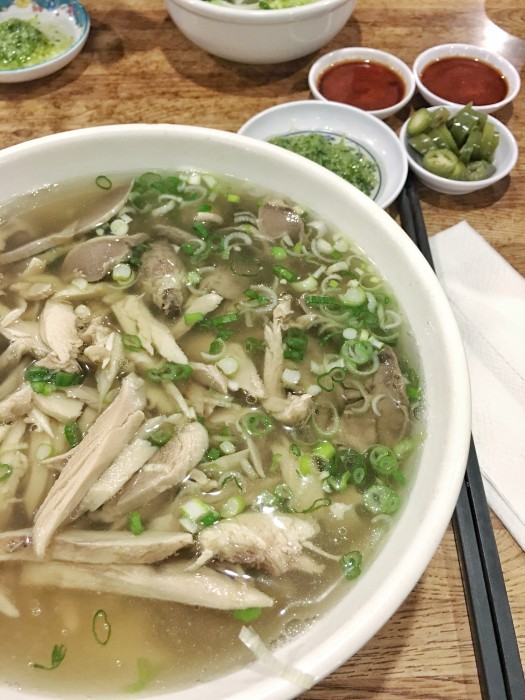 Back to the pho ga, the broth is clear and light. As is the case with all pho restaurants, the older the broth is (in other words, the longer the broth is heated), the darker the soup will be. Except for one occasion at Pho Ga Huong Que Cafe, the broth is light and clear, though never as clear as clear is at Turtle Tower across the bridge when it’s new soup. It’s nicely seasoned but really never hot enough. The thick rice noodles are just right. 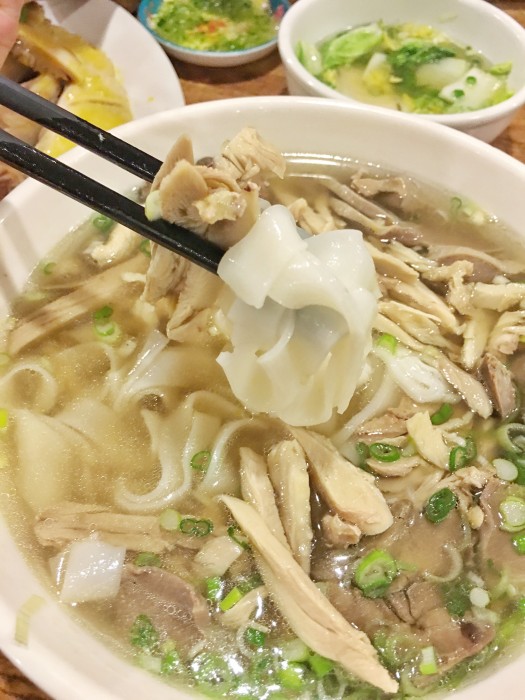 Unlike its competitor across the bridge, the noodles are never overlooked here (which may be on account of the lack of heat in the soup…I guess I just figured it out).

The large pho ga is only $8.50, a steal compared to its competitor, and hefty in portion size. Then again, this shop is located in a substantially shadier neighborhood compared to some Turtle Tower locations in SF…except the Tenderloin one which is shady as shady gets. I can down a big bowl including the soup at Turtle Tower, but at Pho Ga Huong Que Cafe, when I get a large, I barely seem to finish the noodles, never mind the soup.

(OK…mobile posting sucks. WordPress, I find it unacceptable that you don’t have a decent app to do this! And my hands hurt…I miss my keyboard.) 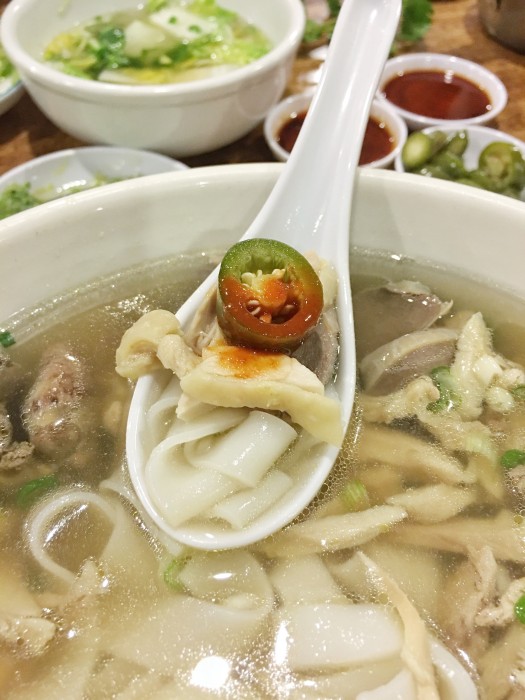 As I do with all pho, it’s about putting the right portions of everything on your spoon. 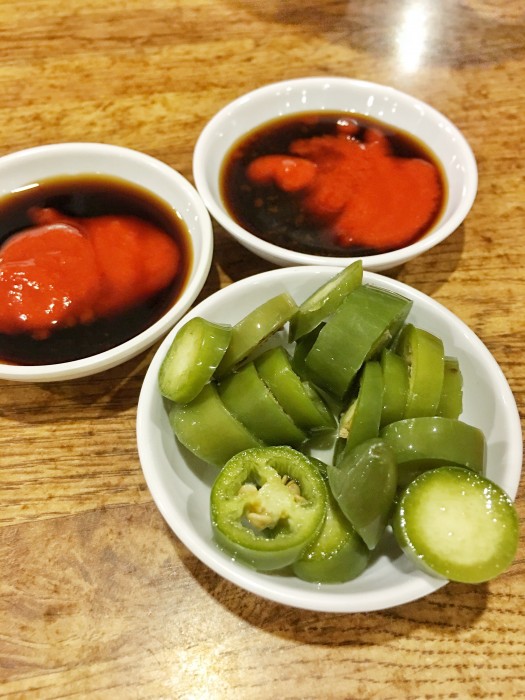 At Turtle Tower, I get a large bowl of fresh jalapeño peppers. At Pho Ga Huong Que Cafe, the plus is that it’s Serrano peppers (yes!) but the minus is that they’re pickled (nooooo!). I suppose I could ask for fresh peppers but I’ve never tried that. I made a fish sauce and Sriracha sauce as usual but the combination of all three is no as delicious as it is at Turtle Tower.

Not even close. The fish sauce was the most watered down version I’ve ever tried. Or maybe it just wasn’t fish sauce, but then what on earth was that? 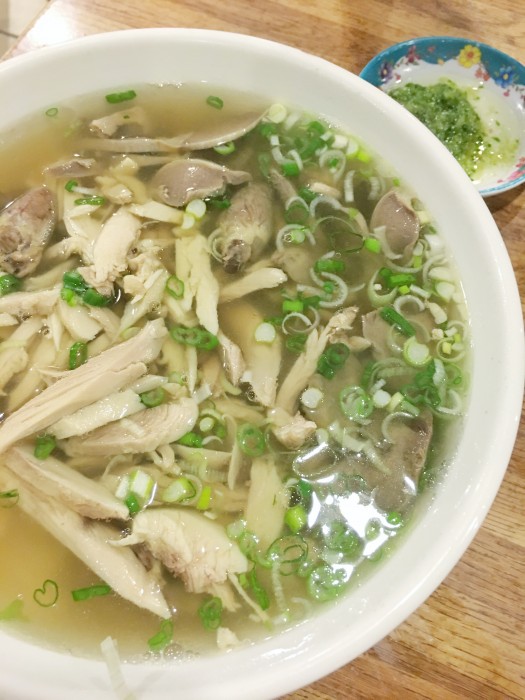 But in the end, it’s chicken pho.

If you’re sick of otherwise feeling blah, Pho Ga Huong Que Cafe is a fantastic option if, and only if, Turtle Tower is too far. If you’re feeling nauseously hungover and think you’re perhaps still drunk, this will be like halon for a nasty fire so long as someone drives you there, since they don’t deliver.

But keep in mind that Pho Ga Huong Que Cafe closes at 6pm. Unless you keep geriatric dining hours, dinner here will not be possible. I’m told they close early because of how shady and dangerous this neighborhood gets past sundown, but I don’t know this for a fact.

As for me, I’m convinced that pho and all the other Asian hot soups of the world are best saved for hungover days. Either that, or you have to be rock solid frozen cold….and I’m like a walking human furnace, as Mr. K so often says (but he has the same temperature as a lizard), so it’s rare I get that cold until I’m totally sick. To me, hot soups just don’t taste as wonderful when you’re eating just to satiate hunger. You need to be otherwise sub par and under some condition…and I want to hear angels. Given how little I drink these days (let’s call it late-found wisdom), it doesn’t happen often, but I’ll look forward to the next time I drink too much scotch and save my pho appetite for the day after that fiasco.

(Yeah, this mobile site posting business is overrated, but I hope the photos are good enough….)

Perfect Pancake Recipe - When You Don't Have Buttermilk