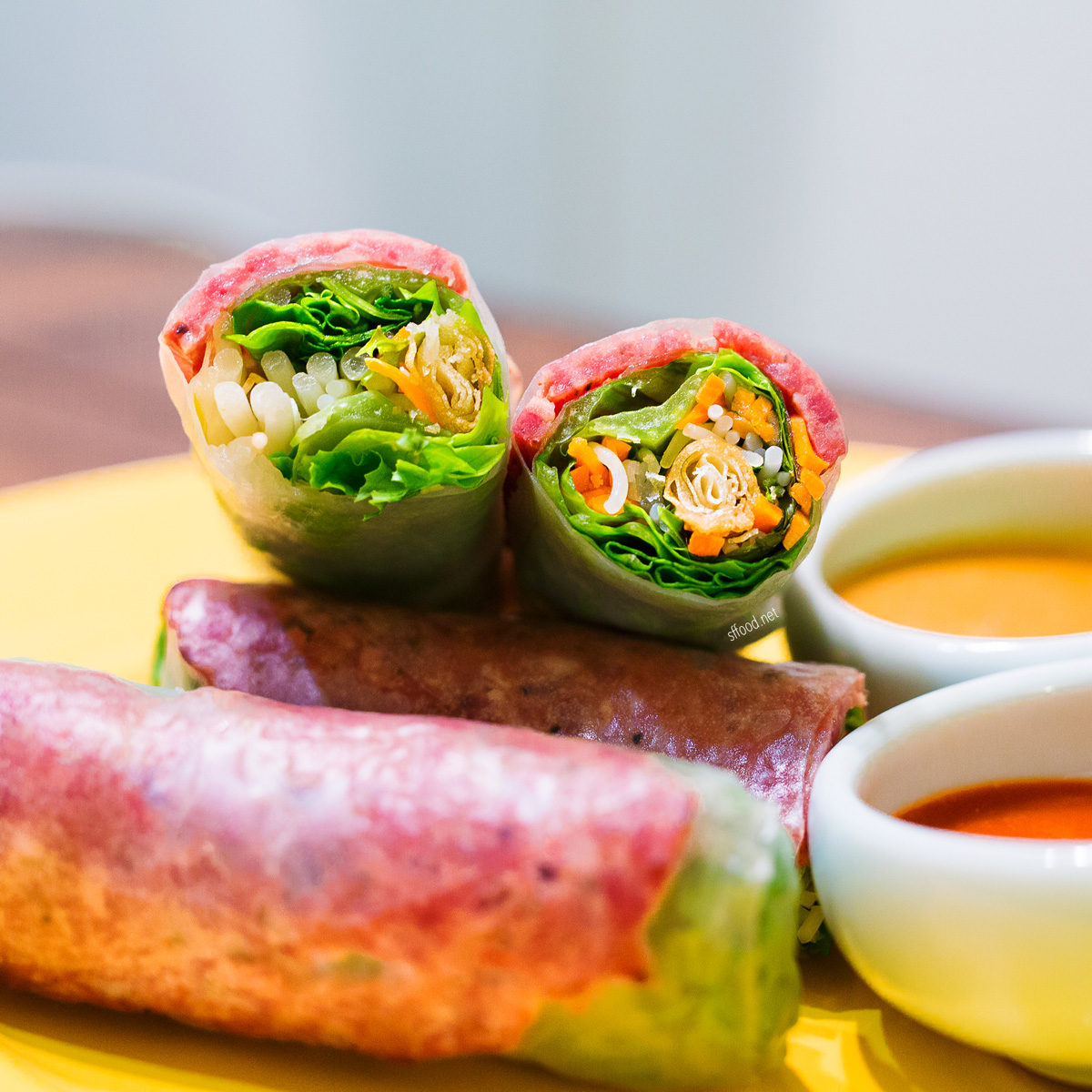 I’ve been totally MIA, I know. The last year of my life has been hectic–but in a good way. I don’t get out much these days, and the few times that I do, I forget my camera. Why is it that once we get on the freeway, it occurs to me that I forgot my camera?

I’ve posted on Instagram relatively often, definitely more so than writing a review here, but I hope to fix that in 2017. Hope. (Follow me on Instagram!)

But what a year we’ve had, huh? In many ways, it was a terrifying year. While this election was devastating as someone who supported Bernie Sanders to the end, hopefully, it is one that we will look back on in 20 years and we’ll be glad we witnessed it live.

But I did want to pop in and let you all know about only the best grilled patty rolls in the Bay Area–well, as far as I have found thus far, anyway. If you know of some place better within driving distance, please–let me know in the comments! 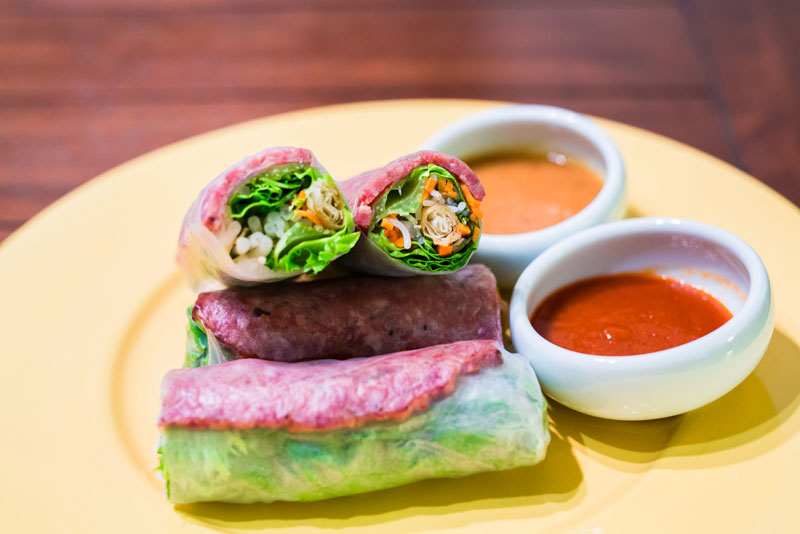 Mai’s Kitchen is just down the street from where I live. I fell upon it just by looking for the closest Vietnamese restaurant to my house on night this past summer, and finding Nem Nuong Cuon (which I became familiar with from Brodard in Southern California when my cousin (visit Bite Me GourmAsian Sandwiches!) basically ordered me to visit), I ordered it hesitantly. When you have had what people call “the best,” it’s hard to think that some random restaurant you find down the street will compare.

Amazing spring rolls, yes. Half a pork sausage, fried #wonton bits make this one fantastic–my cousin @srirachasue was right. But am I the only one that doesn't like this sauce? #brodard #nemnuong #nemnuongcuon 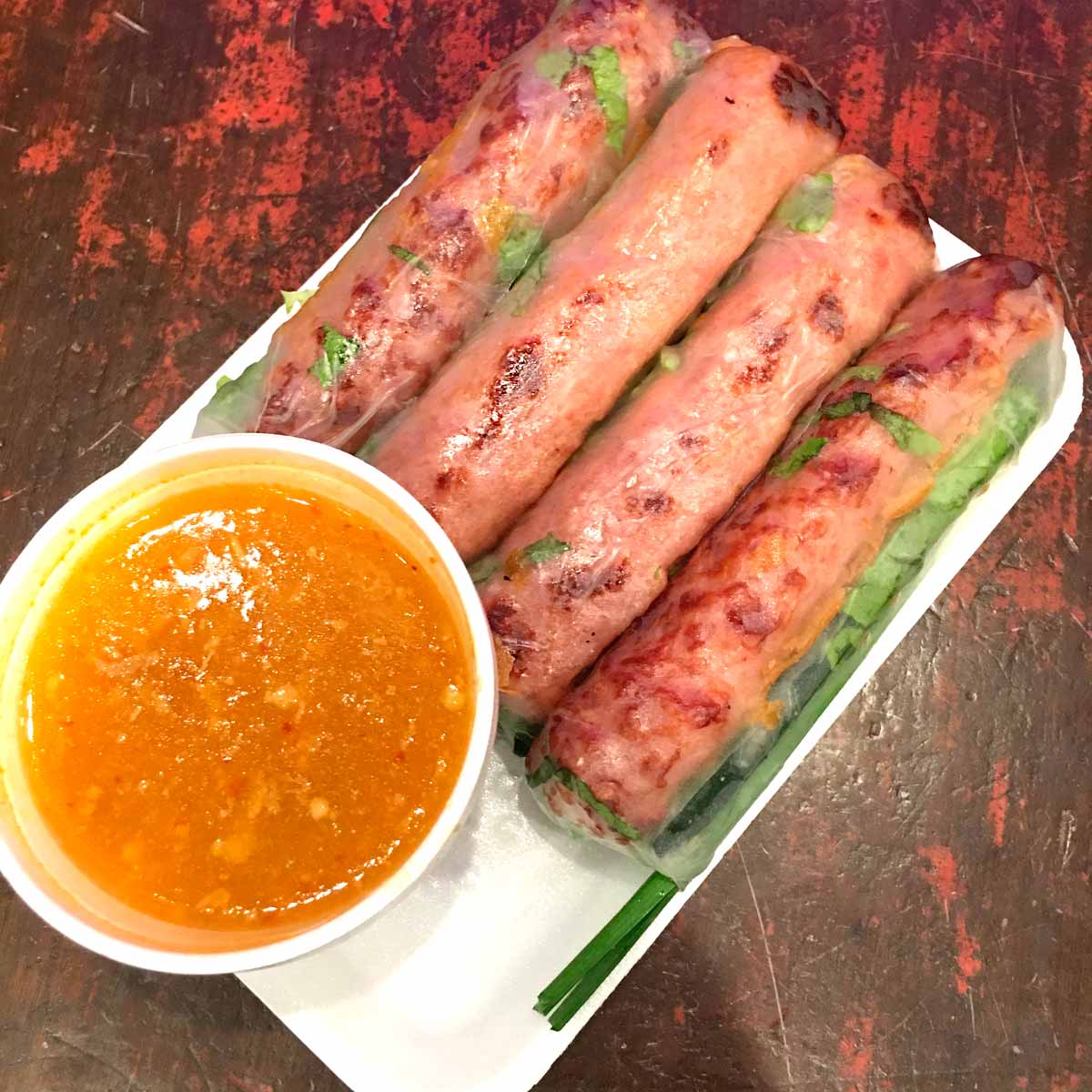 But it does compare.

They’re not identical in that the patty rolls at Brodard include a bigger piece of sausage, less greens, cucumber instead of carrots, no bean sprouts, and less greens. The rolls at Mai’s Kitchen are more similar to regular spring rolls in this regard–and include a small portion of rice noodles as such. As you can see from the photos, the sausage “patty” at Mai’s is also considerably thinner, and it includes a small amount of fried eggroll wrappers.

But the egg wrappers are fried nicely, providing serious resistance when biting into the roll, and the little bit of oiliness that makes this significantly different from shrimp spring rolls. 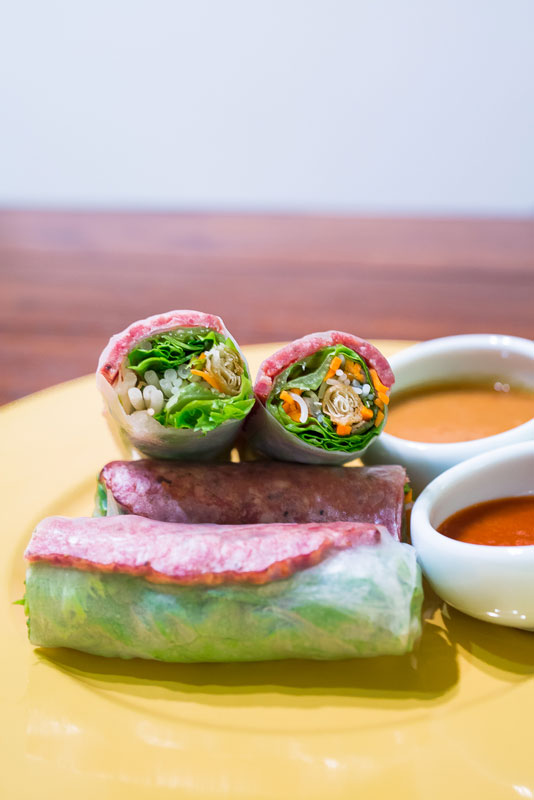 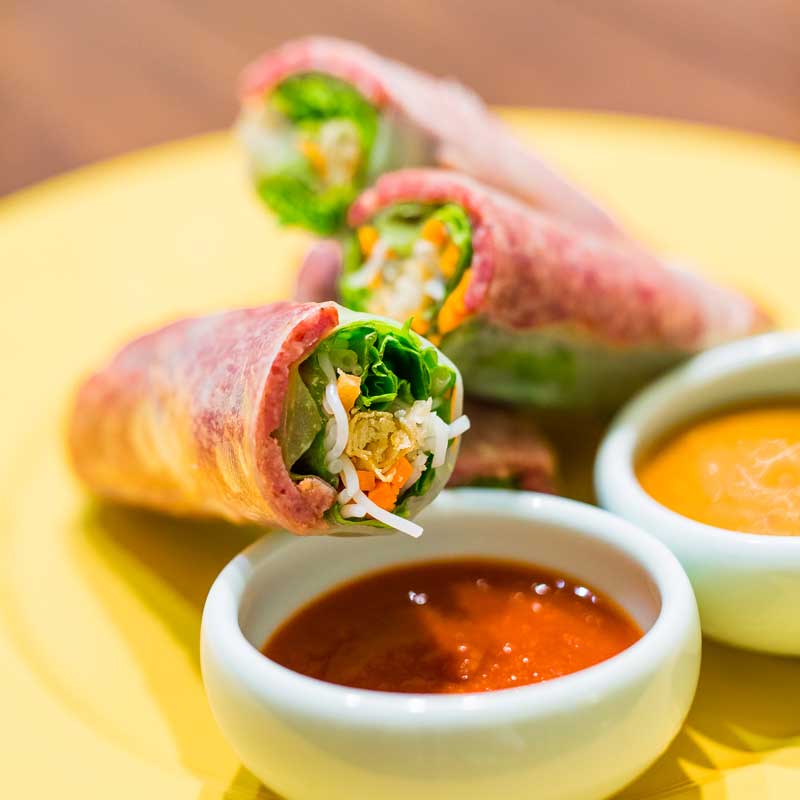 For me personally, the Mai’s Kitchen nem nuong cuon works better overall. The Brodard version is rich and packed with flavor, but after half of one order, you need to eat something else because it’s saltier and oilier. The Mai’s version — well, the restaurant would attest to the fact that we’ve ordered five orders before to share between Mr. K and myself. I eat about two halves at a time, on the hour, every hour, for the entire night. If I have a long night ahead of me working, I always order this for takeout to eat throughout the night so that I’m not craving Ichiban ramen or something disgustingly unhealthy at 3 A.M.

It’s not very often that I taste something and can’t at least begin to emulate the flavor in my own kitchen. While there’s no guarantee that I can replicate it, if I do say so myself–I am really, really good at figuring out the main flavors.

Not so much in this case. I honestly have no clue what’s in this sauce, be it from Brodard or Mai’s Kitchen–except maybe shrimp paste?

My cousin was raving about this Brodard sauce, daring me to find out how to make it, except one taste of it at Brodard and all I could think of was, “It’s like regurgitated, enhanced vomit,” I believe were my exact words. That’s not to say it was inedible, but once my mind  formulated those words, it was hard to get over the flavor of the sauce and even more impossible to identify what might be in it, as you can imagine.

The sauce at Mai’s is 100x more palatable than the sauce at Brodard. It’s ever-so-slightly reminiscent but made sweeter and a little twang of peanuts to make it a subdued version of the Brodard sauce but with the same mysterious whiff of something a little foreign to my taste buds. It’s good–and I think now that I have had about six months of eating Mai’s Kitchen sauce, I can appreciate the Brodard sauce more if ever I go back.

The sauce in the video below is the most similar I have found to date, not that I have any clue what they are using to make it. If anyone understands Vietnamese and wants to write out the recipe for me, I’d love a chance to make it at home!

If you’re in the Fremont/Union City area, I’d highly recommend you drop by to try the nem nuong cuon at Mai’s Kitchen.

I can’t speak to the rest of the menu, though. I once ordered their pho–but for takeout, and I don’t think it’s fair to really assess their pho without trying it in person onsite. I tried their shaken beef once, which they call Shaken Filet Mignon, and I’m not a fan–the meat was subpar, I’d bet my life it’s not filet mignon, or if it is, it’s about as overcooked as I’ve ever had it since it was so chewy and tough–but again, because it was takeout, it’s hard for me to judge accurately. I’ve actually never been inside the restaurant and always call in my takeout order for Mr. K to pickup, so while I can’t comment on in-house service, they are pleasant on the phone, and they get my order right, though one time, I found that the rolls were pre-made (and chilled), vs. freshly made. All the other times, they were freshly prepared. (This is easy to discern with rice wrappers.)

My go-to order is their ham and paté sandwich (banh mi) with a fried egg, and an order of grilled pork patty rolls all of the time–I just can’t get enough!

The pork patty rolls are $3.75 per order (two rolls, cut in half making four pieces per order), and the banh mi are all under $5.00 which makes for a really economical meal.

All in all, I think Mai’s Kitchen is a good find!

Mai’s Kitchen is located at 34587 Alvarado Niles Road, Union City. There’s plenty of parking in the strip mall and while I’ve noticed the phone number for the restaurant tends to go on and offline often, if you keep trying–it’ll often connect. Lucky for me, if that fails, I send Mr. K in to wait. 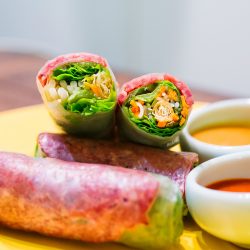 Tonkatsu Recipe | How to Make Tonkatsu Perfectly at Home