It’s a bold move opening up a ramen joint in San Mateo these days. The small city is chock full of ramen places, and some astonishingly good ramen places, to boot, like Himawari-Tei and Ramen Dojo. Then they have the previous superstars like Santa Ramen, which, incidentally, I visited recently, and it remains subpar compared to its great days of years gone by. Or perhaps there’s too much good ramen now for Santa Ramen to shine.

Yet, another ramen joint opened its doors in San Mateo.  Kagura Ramen.

Ramen is in my blood as a Korean and as someone who grew up in Japan. Everywhere I turn, there’s ramen of some kind, and even in my own home, regardless of how much I cook, there’s always a couple of boxes of at least two kinds of ramen. I can completely understand people who don’t eat ramen because it’s not entirely healthy; but I cannot, will not and refuse to understand people who say ramen doesn’t taste good. I refuse!

Be it fresh ramen or instant ramen, they both have a place in my heart. Obviously.

So a few months ago, a beloved friend of mine spent about three weeks checking into one place in San Mateo. It was like Facebook was having a glitch because every lunchtime and every dinnertime, he seemed to be at this one location. I kid you not, I think he was there at least every other night, taking over my newsfeed.

Now this is a friend I love to pieces. I really do. But God didn’t see fit to give him good tastebuds or a really good sense of smell, and short of food that most 10 year olds love, like mac and cheese and mashed potatoes, he doesn’t really like food that much. He eats–but I have yet to see him get excited over any adult type of food. (His tastebuds, however, love alcohol.) Thinking back, in the five years I’ve known him and seen him very regularly, I have never had sushi with him…

One afternoon, he raved about a new place “that you must try” — a ramen place.

“You mean the same place you’ve been eating at for three weeks?” I asked, shaking my head with a sigh.

He chuckled (he does have a pretty decent sense of humor) and said that we had to go.

With a couple of other friends, we headed to Kagura Ramen for lunch on a Friday a few weeks ago. At noon, the place had two tables seated.

The location is quite small and dainty with a distinctly Japanese feel to it. It could conceivably be a location in Japan, though it would be even smaller in Japan. Everything is very clean and tidy at  Kagura Ramen, or at least gives that feeling. Decor is stylishly minimal here.

I spotted two servers. I secured a table for four, but everyone else was late, so we really didn’t sit down to eat until everyone had arrived, and it was 12:30pm. Kagura Ramen was nearly full, but I didn’t hear any complaints that my party had not arrived and we hadn’t ordered. 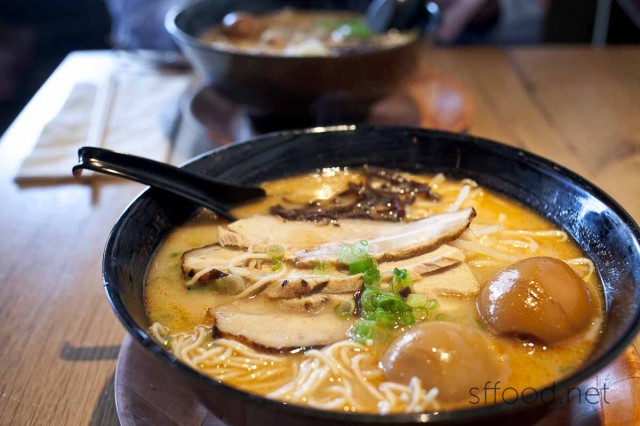 Anyone who knows me will tell you that this girl can eat. But truthfully, that applies to dinner mostly. For lunch, especially when I have to go back to work and can’t go collapse on a sofa somewhere, being unbearably full is…unbearable.

Since we were at Kagura Ramen for lunch, we all ordered only a bowl of ramen each, which is what makes this an initial review. It didn’t appear that the majority of the Izakaya menu was available for lunch though they did offer some salad, appetizers and don-buri type offerings. I only tasted my ramen and the review is solely about that ramen.

I opted to order the Tonkotsu ramen, which is a broth derived from crushed pork bones. Much like beef bones, after hours go by and the collagen and marrow are broken down, the gorgeous white broth begins to emerge, but with true Tonkotsu broth, the bones have to be broken down prior to boiling.

Customarily, I’d have tried a plain shio broth first but on this day, but there was no such thing here, and the standard appeared to be the regular Tonkotsu. While the Hakata Tonkotsu is their special, I tend not to like the thinner noodles that comes with Hakata-style, so I ordered the regular noodles with an additional egg and extra chashu. (Girl needs some protein.) 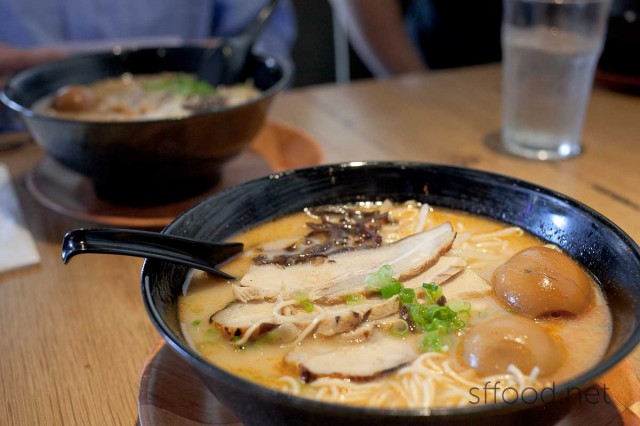 The Ramen at  Kagura Ramen

First, the soup at Kagura Ramen is really quite spectacular. (My friend, for perhaps the first time ever, was right about the taste!) Unlike Ramen Dojo where one spoonful of broth can get you full from the sheer thickness of the soup, this one remains relatively light but creamy. Unlike some broths, the creaminess in the broth doesn’t feel fatty.

The noodles have a nice bite to them and are cooked perfectly. Combined with the saltiness in the broth, which is spot-on, the combination works nicely.

The chashu at Kagura Ramen was impressive. While they retained their shape nicely, it quite literally melted in your mouth. If I could keep myself from chewing and swallowing it, I suspect it may have melted away completely. The fat vs. meat balance of each piece is nice.

The egg at Kagura Ramen was Ajitsuke style, marinaded in a soy sauce concoction, but with a little more heftiness. I don’t know if it’s dunked in butter or what, but one egg left you with the feeling of being very filling. Two eggs were a stretch–though I managed just fine. The yolk, which I wish I had photographed, was a nice custard-like consistency, but a bit cold for my liking.

Obviously, these eggs have to be pre-made to be marinaded, but bringing them back to some warmth would have been preferred.

Overall, it was a sturdy and comforting bowl of ramen that is most definitely worth trying. If you like Ramen Dojo, I think there’s a chance you will like Kagura more; but if you like lighter ramen like Ryowa or Himawari-Tei, then this might be a bit heavier than you prefer.

Service was nice and friendly. As mentioned, they didn’t complain when I was hogging up a table while they were getting busy, and our orders had no issues at all.

Being an Izakaya, there are other items here that are offered for the dinner menu. Apparently, they serve sushi, too, though I don’t know that I’d go to an Izakaya for sushi. With what appear to be fair prices, I think I’ll go back for dinner one day soon. In fact, I’m pretty sure I’ll have no choice but to go back to try it as my friend is STILL checking in there at least once a week. These days, if he doesn’t come over for dinner, the only way I’ll see him is if I go to Kagura Ramen.

Next time, I’ll be sure to try the other izakaya items and test out the sake. And, given the tastiness of the noodles in the regular tonkotsu at Kagura Ramen, I’m inclined to try the Hakata Ramen. I’ll save my ratings until I’ve tried more from  Kagura Ramen.

You can check the Kagura Ramen website for their business hours. The website also shows the various sister restaurants in the area and Southern California. This location is owned by the same folks who own Shabuway, to my understanding.

Head over for lunch and give it a slurp!