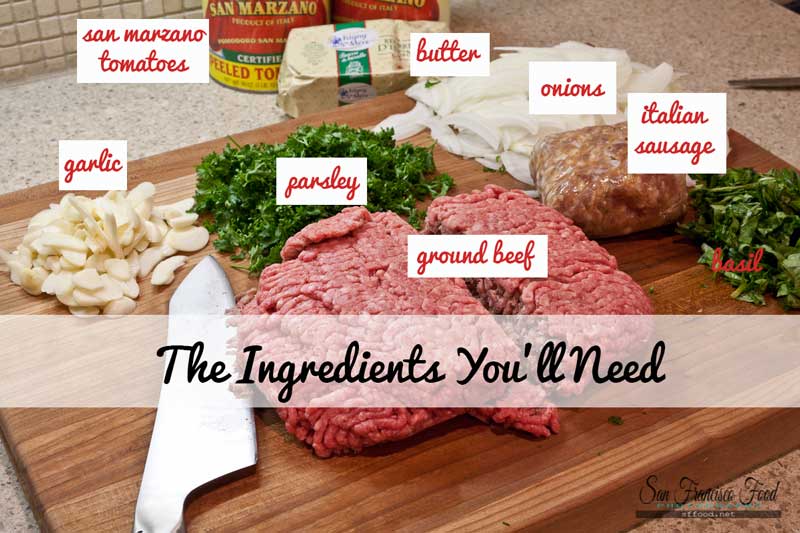 Most nights when I begin to think about what to make for dinner, I don’t have much time left before dinner will be served. On those nights, this meat sauce recipe goes out the window because while it’s seriously easy to make, the one thing it does require is time. You can’t make any kind of meat sauce without a good amount of time, and for my recipe, I recommend no less than 2 hours and if you can do more, even better.

On nights I don’t have the time required, I just use sauce from whatever kind spaghetti sauce jars I have at home. I’m always rotating through various brands because for the life of me, none of them taste good on their own, all need to be doctored up and more often than not, the flavors are just boring. They’re really made just to be tasty for a child’s palate, don’t you think? 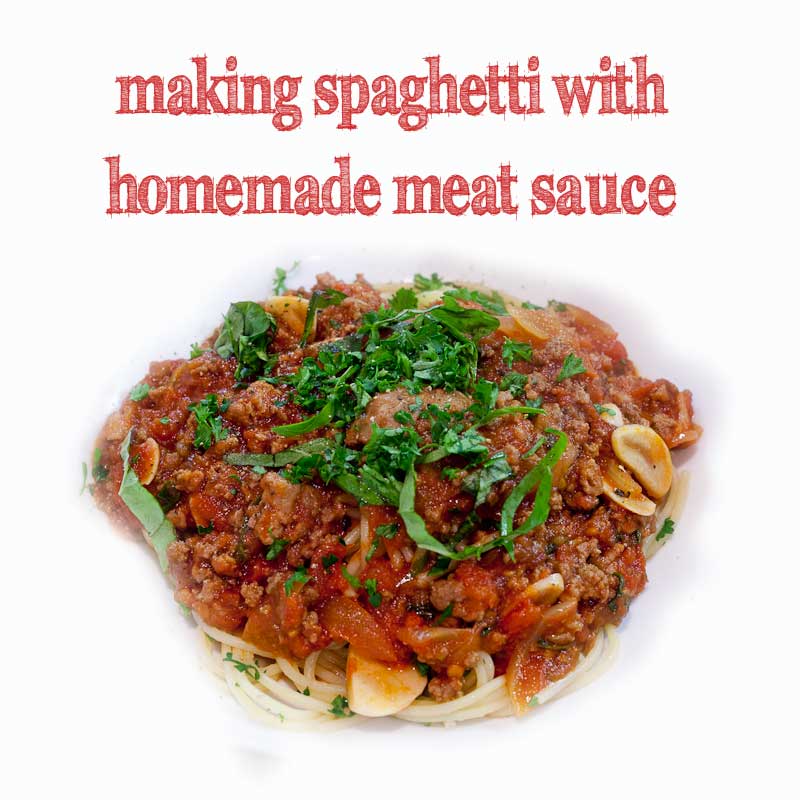 Homemade meat sauce, on the other hand, yields many different layers of flavor, and it's this flavor you try to develop by slow-cooking it for hours.Click To Tweet

You can’t replicate it by just using MSG, or just using fattier meats. Nope, the time is required and at two hours, it’s delicious–but at three plus hours, it’s even better.

For the purpose of this review, I prepared all of the slicing stuff before starting, but normally, I’ll do it as I go. Up to you!

Alright, first — for tonight’s dinner, I’m making about 5-6 people’s portion, so double or halve it accordingly.

Heat up some olive oil (1T) in a hot pan and then toss in your meat. I’m using about 1.5 lbs of ground beef and about a 1/2 lb of Italian Sausage that I just happened to have in my freezer from a previous batch. I’ve left out sausage countless times and while it’s missed to a degree, it merely adds a bit of complexity to the taste rather than full-on flavor. So if you don’t have it — skip it. If you have regular pork and a meat grinder — have at it. But ground beef is essential to this meat sauce recipe.

Letting them brown a little bit, keep stirring and stirring while also chomping at the meat with whatever utensil you’re using to break it apart before they cook through. 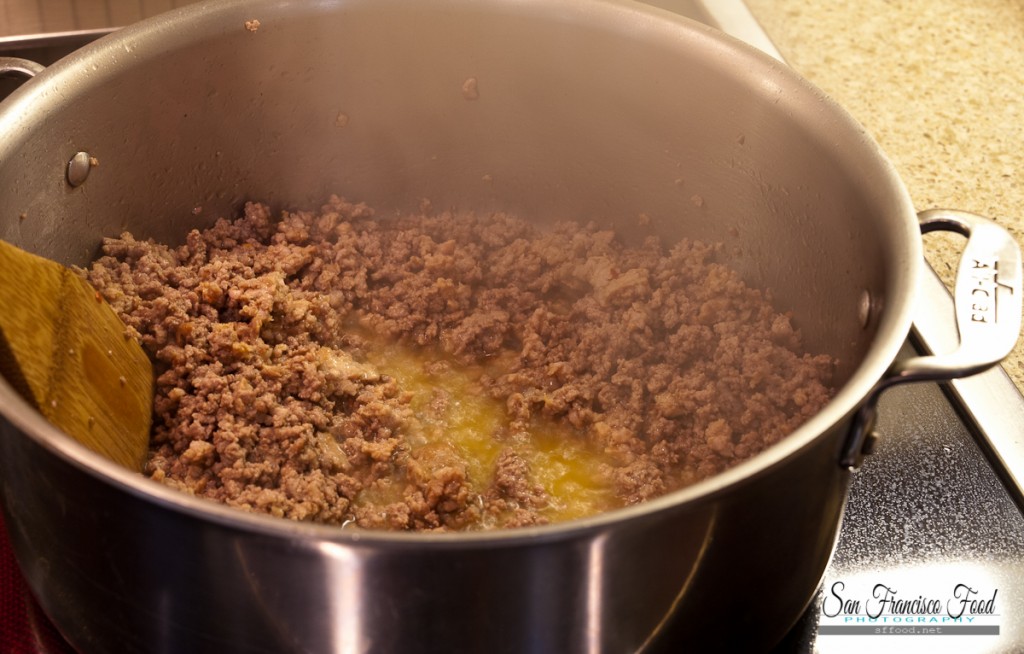 What you’re left with is a good amount of meat and a crapload of oil. I know I only put in 1 T of oil, so this yellow stuff in here is coming out of the beef and pork.

Now, my 20 year old self may have just continued on with this, and that part is up to you. My much older self has decided dying at 55 is earlier than I imagined when I was 20, so I am compelled to drain this excess oil out. I also hate how it floats to the top in liquid-y globs when you’re cooking the meat sauce, so — unless you have some serious reason to keep it — toss the entire thing into a colander and let it sit in the sink while you do the next step. 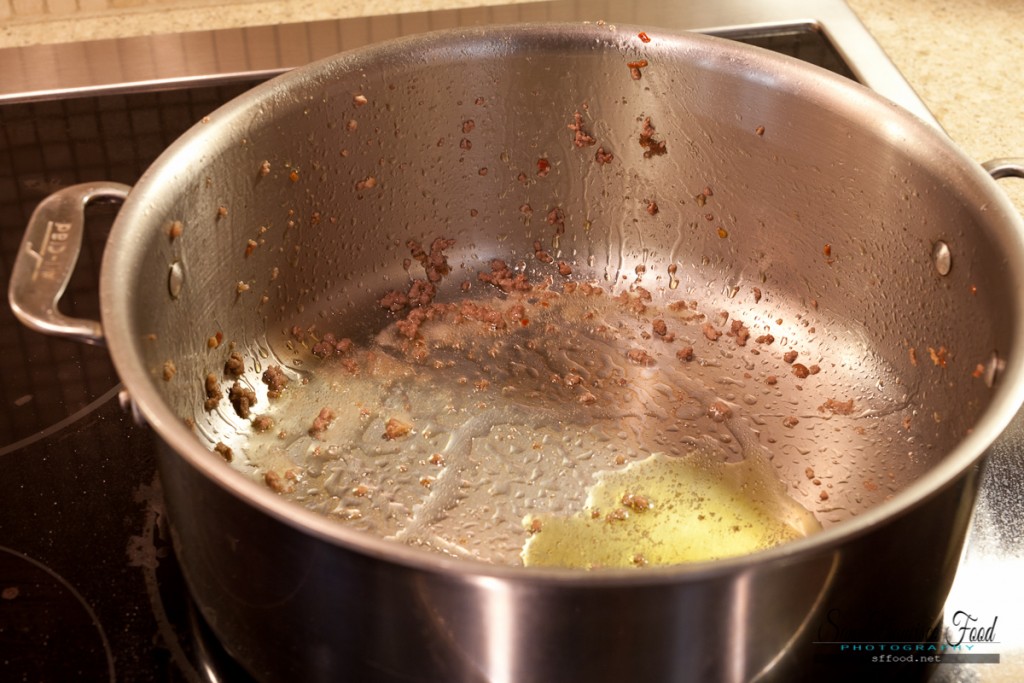 Alrighty, I dumped out the meat into a metal colander, and now the pot is back on the stove–still hot. Nonsensical, but now, I add a little bit of olive oil. (Hey, olive oil is one thing….beef and sausage is another beast, alright?) 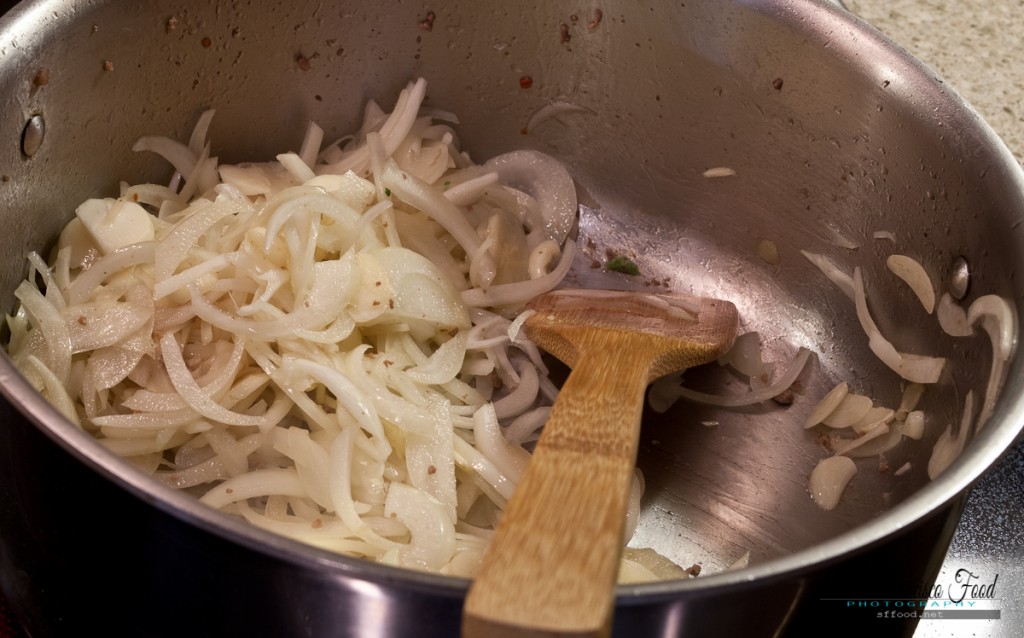 Toss in your garlic and onions, and as they cook, toss in about a teaspoon of salt. The onions will continue drinking up whatever oil was in the pan but only up to a point before they’ll release the oil again.

So, without further adieu, bring back the beef. 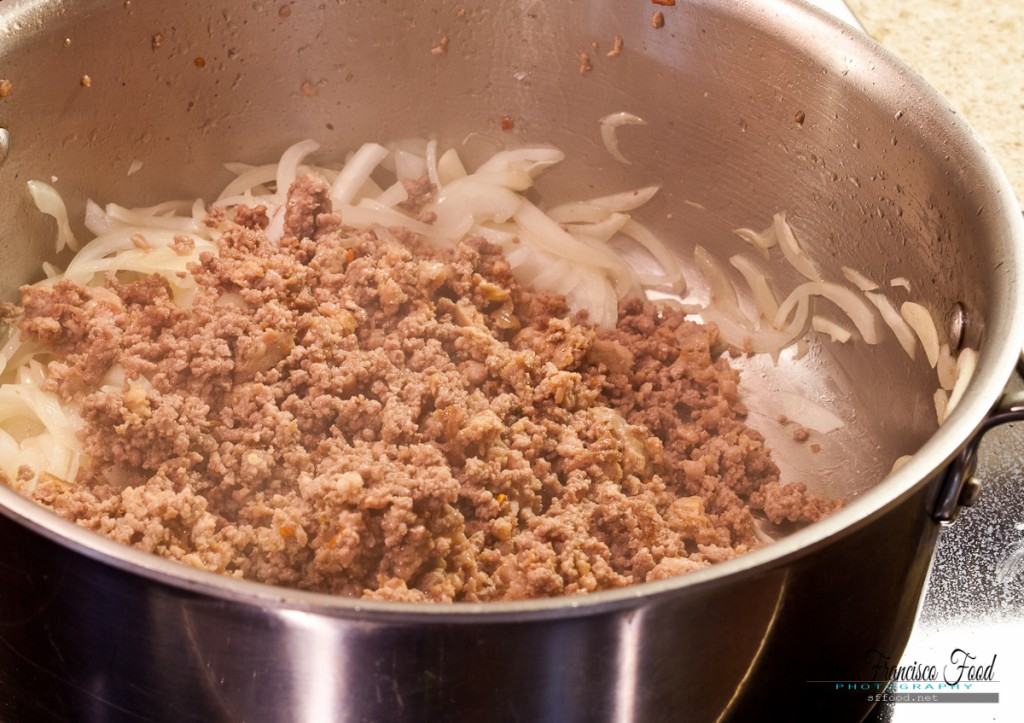 You can see the beef has completely drained of all liquid and whatever fat it has left in the meat is all it’ll have. I don’t usually buy lean beef for ground beef, so it’ll be fine. Stir these together to heat them through and keep the stove on medium-low for the moment.

While the beef and onions are cooking further, open up the cans of Cento San Marzano Tomatoes. Hands down, this is the best canned tomato for this meat sauce recipe. I’ve tried other varieties of peeled tomatoes, including other San Marzano tomatoes (they’re lying!), but the taste and acidity in this tomato is by far the best. One can of this stuff costs in the $5-6 range, and for this meat sauce recipe, we’re using two cans. This also means that before I even price out the meat, I’ve about $12 invested into this sauce. 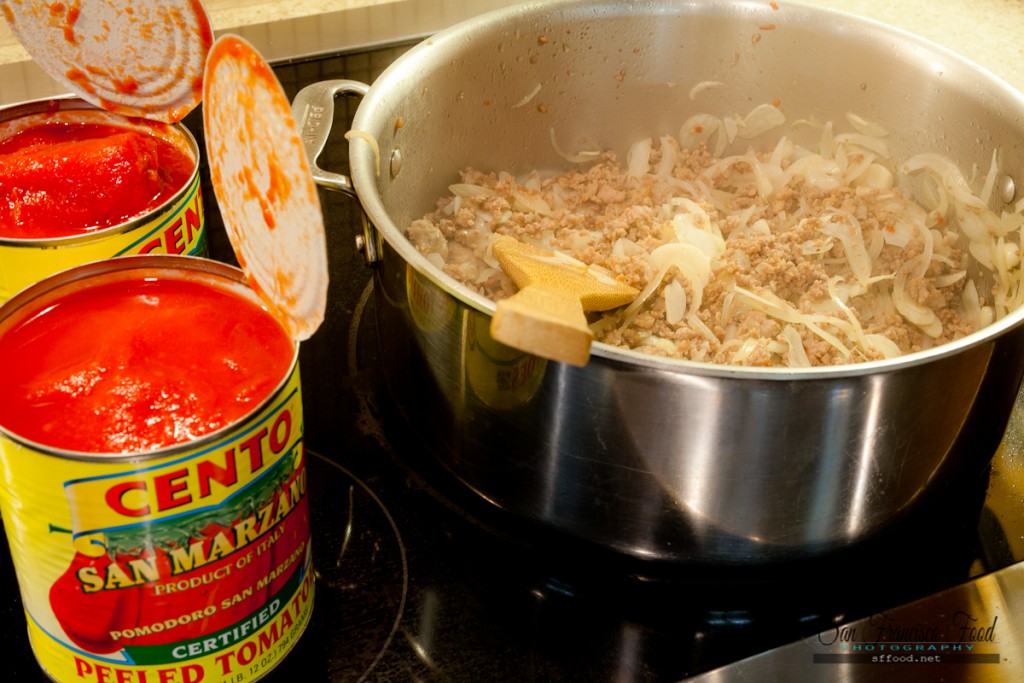 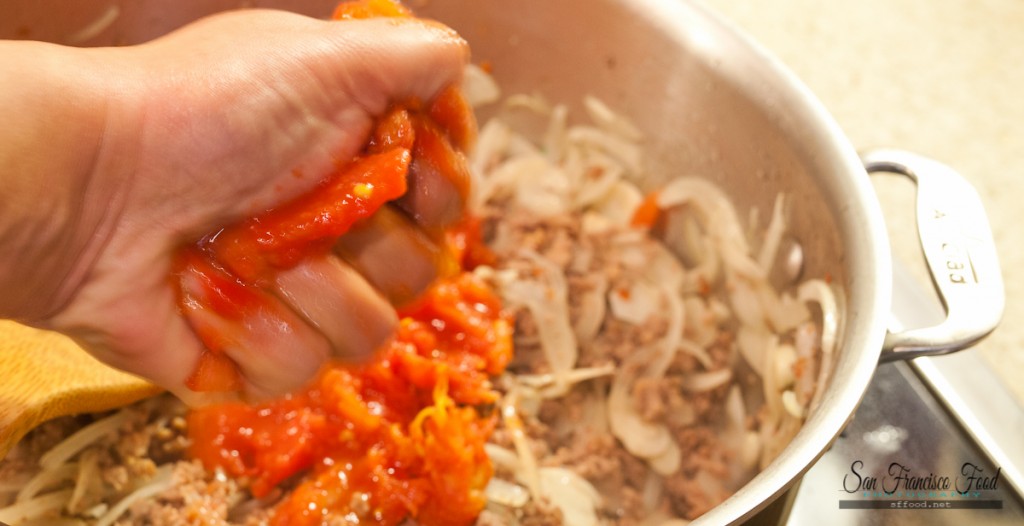 Forgive me while I try to take a one-handed shot of my own hand and….failed.

But what I’m trying to show you is how you add these tomatoes to the beef and onion mix you have going right now.

Take the cans over to the stove, and gently pick up one peeled tomato. They’re boiled soft, so you don’t need much strength to do this but you do need to be careful because with just a little force, you’ll have tomato juice clear across the kitchen. Slowly and gently bring your fingers into a fist and the tomato will break apart accordingly–through your fingers and out your fist. This is by far the easiest way to do this part.

Take the rest of the juice in the cans and pour them into the pot. Stir, and you’ll begin to have something that finally looks somewhat like meat sauce. 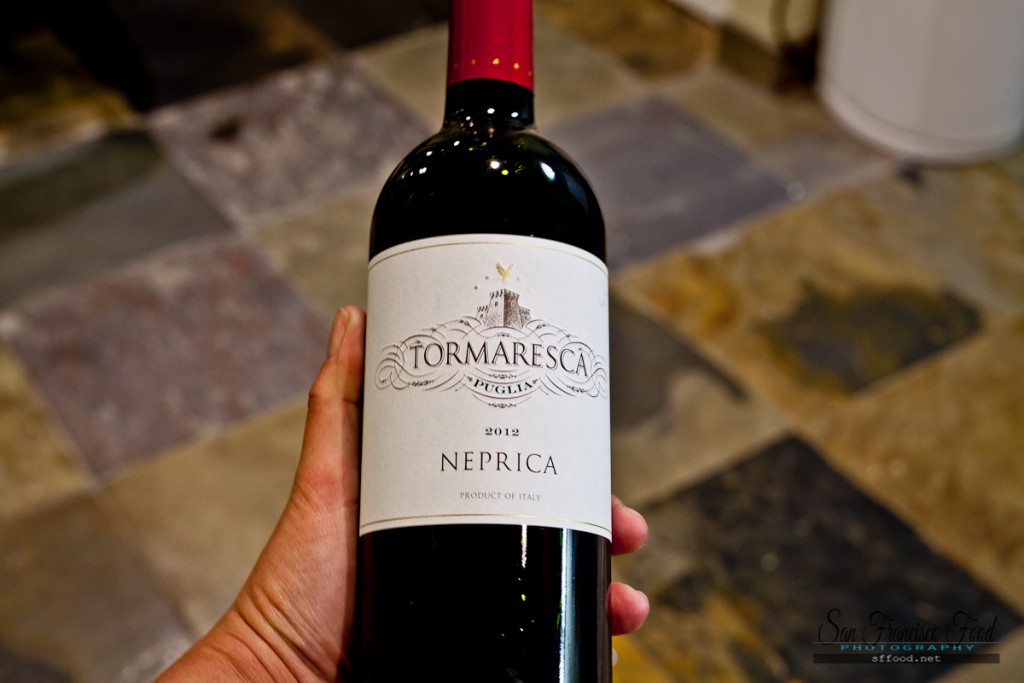 Is there some reason that whenever I make this meat sauce recipe, I feel obliged to use an Italian wine? Much of the Chianti I have had in my cellar over the years gets opened (and thereby, consumed) because I had to use it for meat sauce. And of course, I have no issue with finishing off the rest of the bottle.

[alert type=blue ]But did you know, by the way, that I do not consume a lick of alcohol until I’m done cooking? I’ve learned through multiple occasions that once I start drinking–even just a sip or two–I can no longer season my food correctly. I’m sure it doesn’t apply to everyone but something about my tastebuds goes haywire when I taste while drinking, and I make it too salty or too bland. So there could be a full-on rage going on behind me but I will absolutely not drink until I am done seasoning everything I’m cooking.[/alert]

And before we move on, let me take a second to tell you how good this wine is. Most of my “favorite” wines (meaning I love them and they’re within a reasonable budget) will come in anywhere between $20-$45 per bottle. I’m okay paying that much per bottle, and anywhere over that and it had better be a vintage and winery I know I love. I have some amazing bottles in my cellar that cost hundreds of dollars but I now regret getting those because it dawns on me now that I will probably never drink those; I”ll probably have to will those to someone who I like and likes wine.

But I do have a good selection of under $10 wines because (1) I hate using an expensive bottle of wine for cooking purposes even though I love good food, and (2) once every few years, I go on a wine binge where I want wine with my meal all of the time, and if I’m opening a bottle per night, $30 per bottle gets expensive really fast.

So, on a recent run to K & L Wines, I bought this bottle of Tormaresca “Neprica and it’s wonderful. I want to say it’s “berryful” even if I know it’s not a word and the wine is alive and dancing when you drink it. It’s not a big wine by any means but it’s fun wine and it tastes good right then and there. I opened my bottle, took a tiny tasting of it–and did a double take. Suddenly, it was too good to use in my meat sauce recipe, haha. 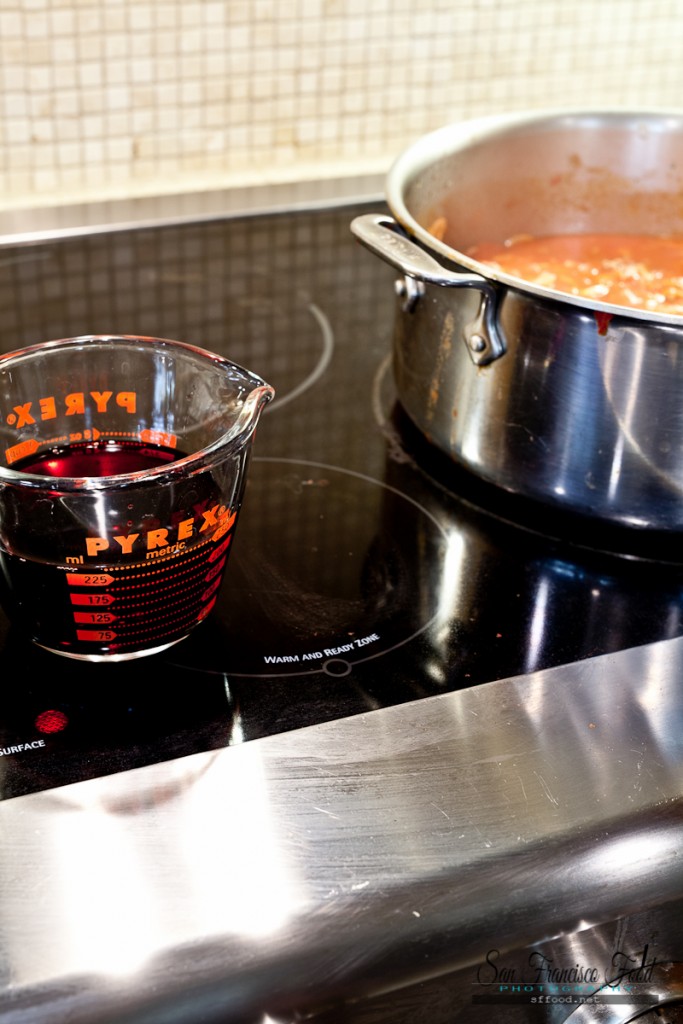 With a table wine or a bottle I didn’t like too much upon tasting, I’d have filled that measuring cup to the top–about a cup and a half. But, one tasting of this and there was just no way. I skimped out on the wine and decided we’d have wine with dinner instead. (The wine didn’t even make it to dinner.) 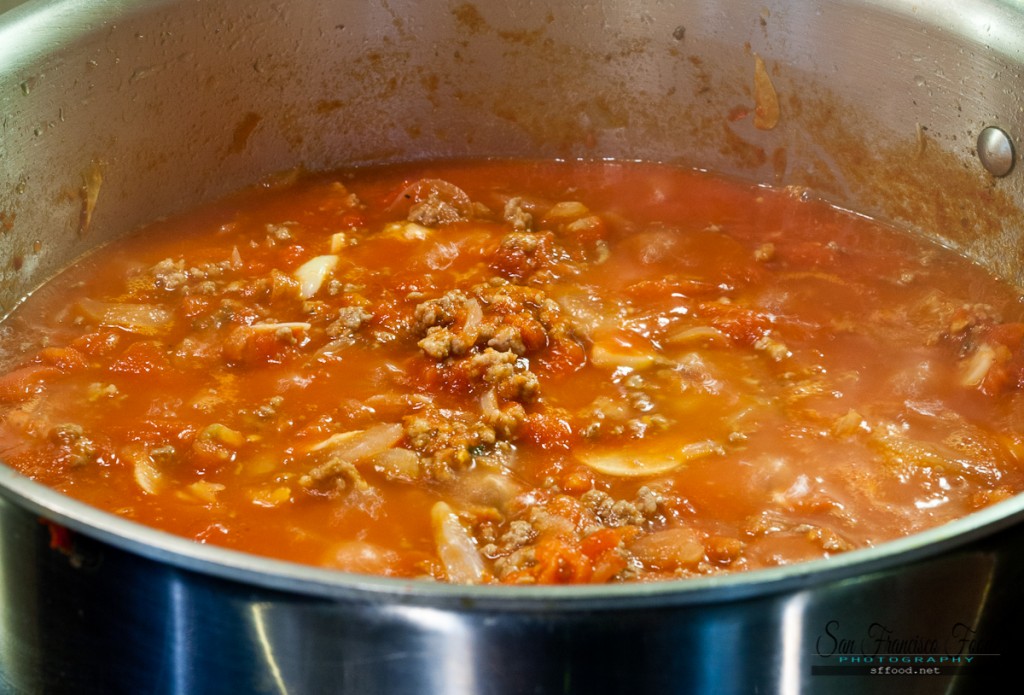 Alright, the wine is in the sauce!

Now, add a tablespoon of the following: soy sauce, salt and sugar. Just trust me on the soy sauce, OK? Give it a good stir, cover, turn it down to low/simmer and then you wait. 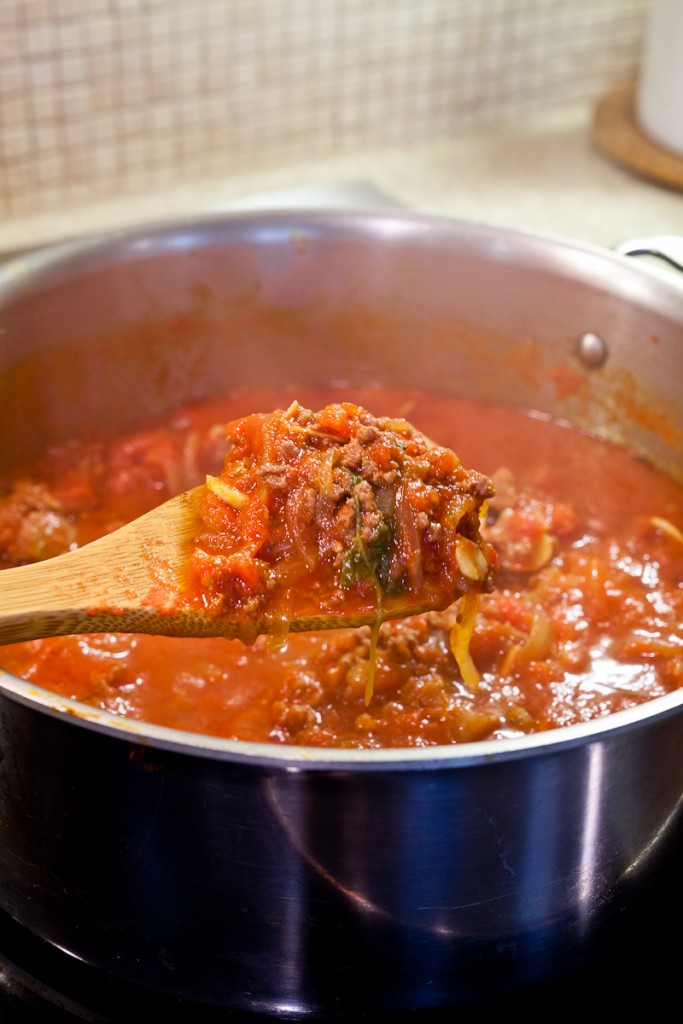 Anywhere between 1.5 hours later to 2 hours later, taste the sauce and see how much salt it needs.  The rest of the seasoning, do with the salt. I don’t make my meat sauce as salty as I do other things, because I don’t like how noodles get plated to die and be outshone by the sauce. Some of the salt, I’ll save for the noodles.

When your sauce is basically done, begin boiling the noodles. As you do that, stir in the basil. The pot is still simmering on low which will be hot enough to break down the basil but not make it “gross.” 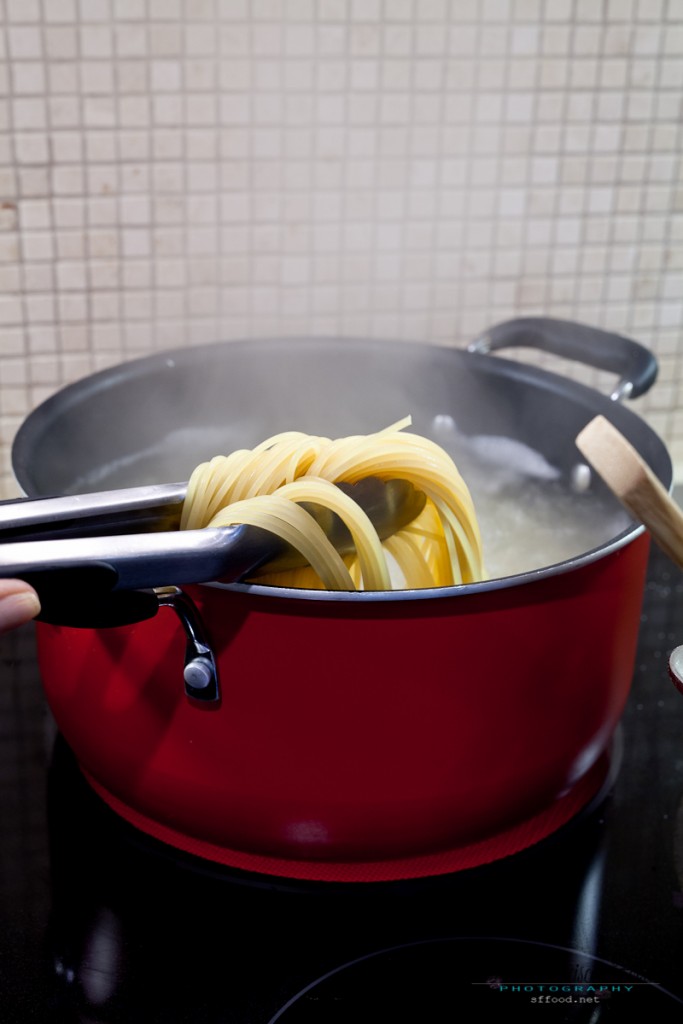 The worst thing you could do right now is overcook the noodles, so watch them carefully until ready. (The above shot would indicate it needs a good 4-5 more minutes on the stove.) When they’re done perfectly al dente — toss the whole thing into a strainer. 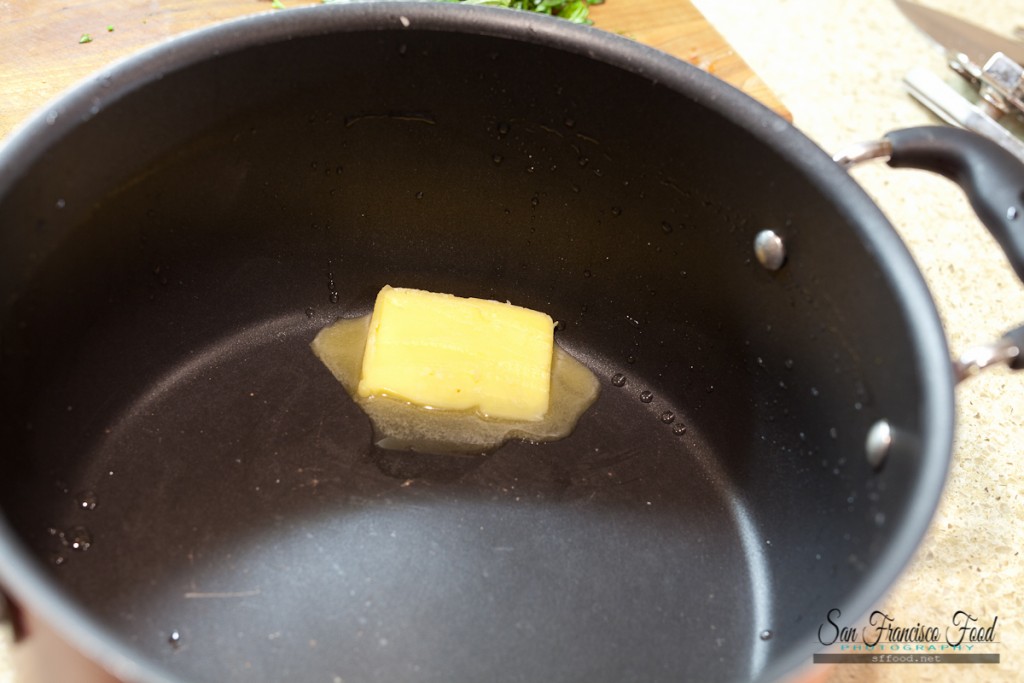 Imemdiately, take 1.5 T of butter and let it melt in the still-hot pot. I interchange between butter or olive oil at this stage — use what you like.

Toss in all of the noodles once you make sure they’re nicely drained. 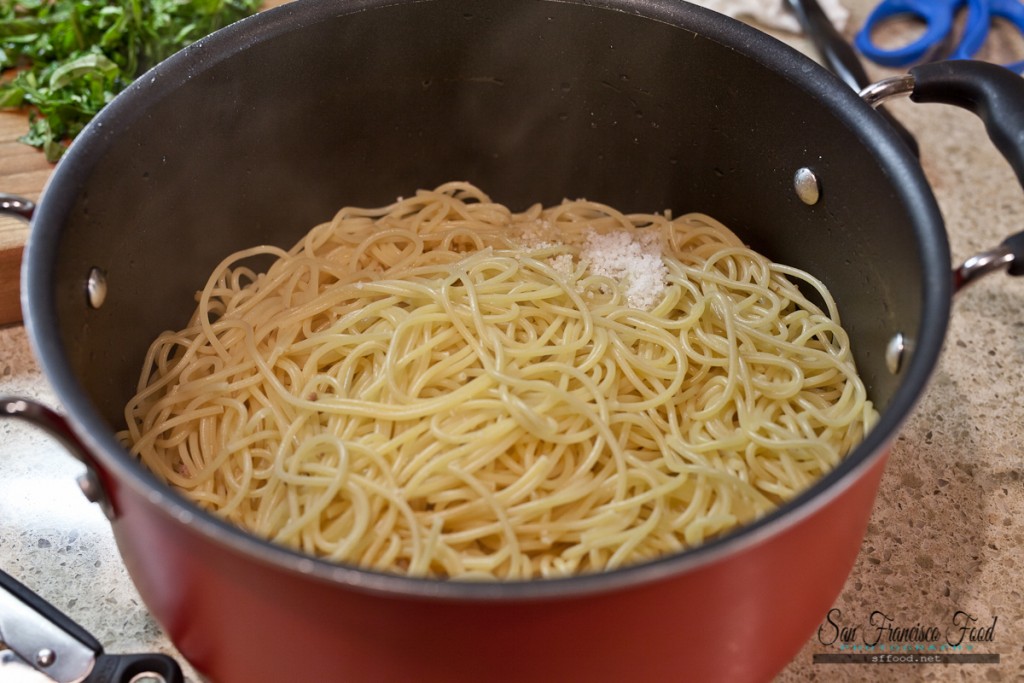 Here, I using my favorite fleur de sel, since I don’t need more than a tablespoon’s worth. Toss the noodles over and over again until you’re sure the salt has dispersed and the butter is melted and coating all of the noodles. 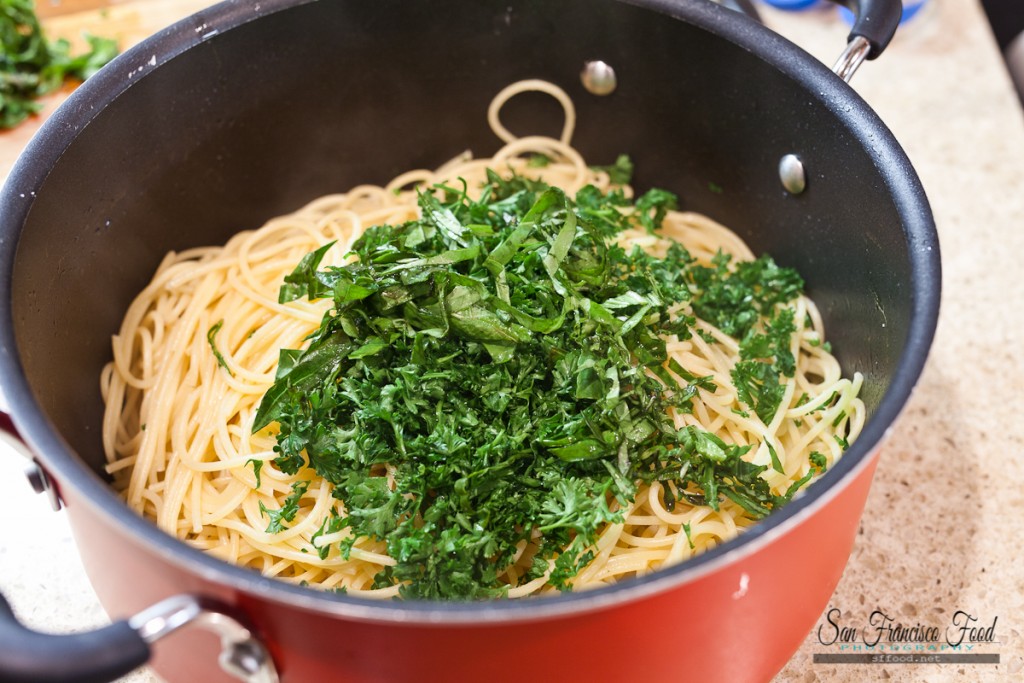 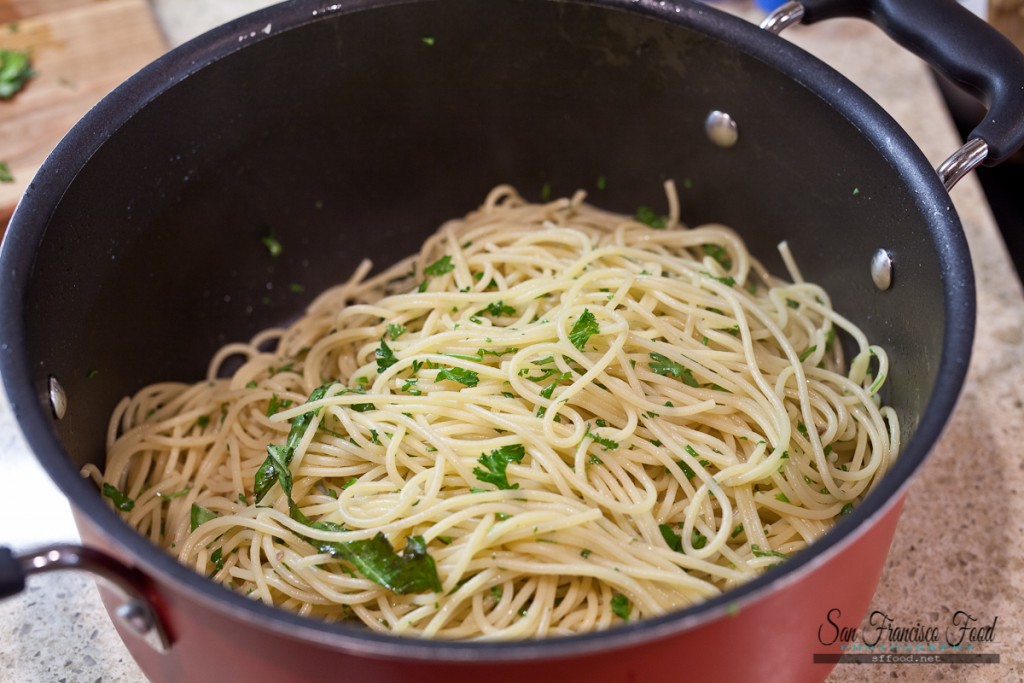 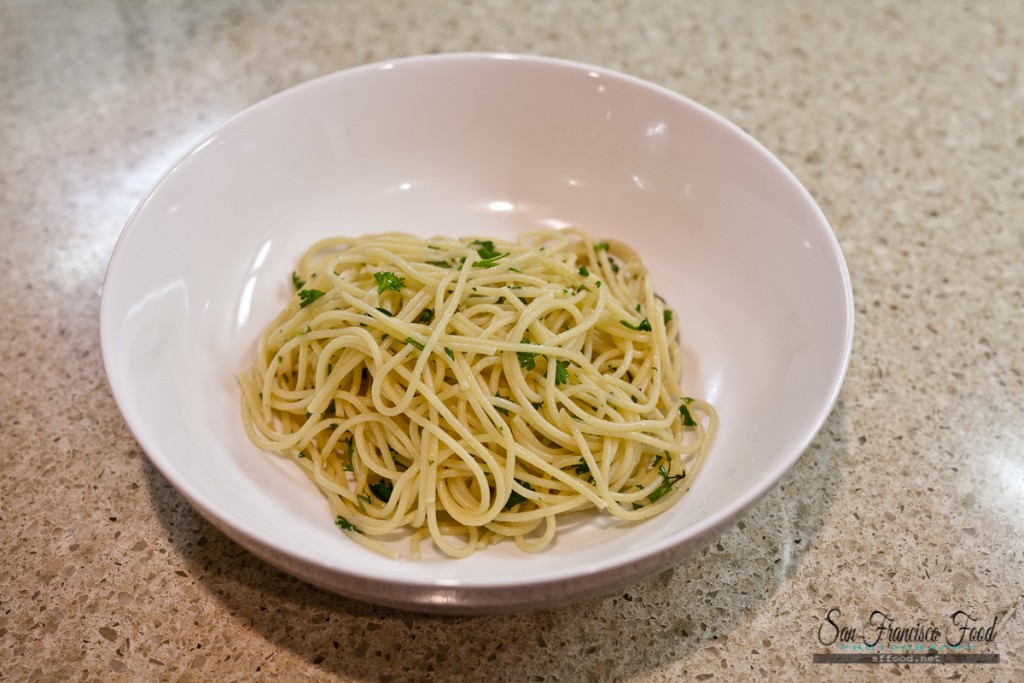 Now, take all of the parsley and toss into the noodles, mixing it all up. Definitely taste the noodles—if it’s bland, unless your sauce is quite salty, it’ll be pretty blaah. So kick up the salt and make is so that the “butter noodles” taste delicious on their own. 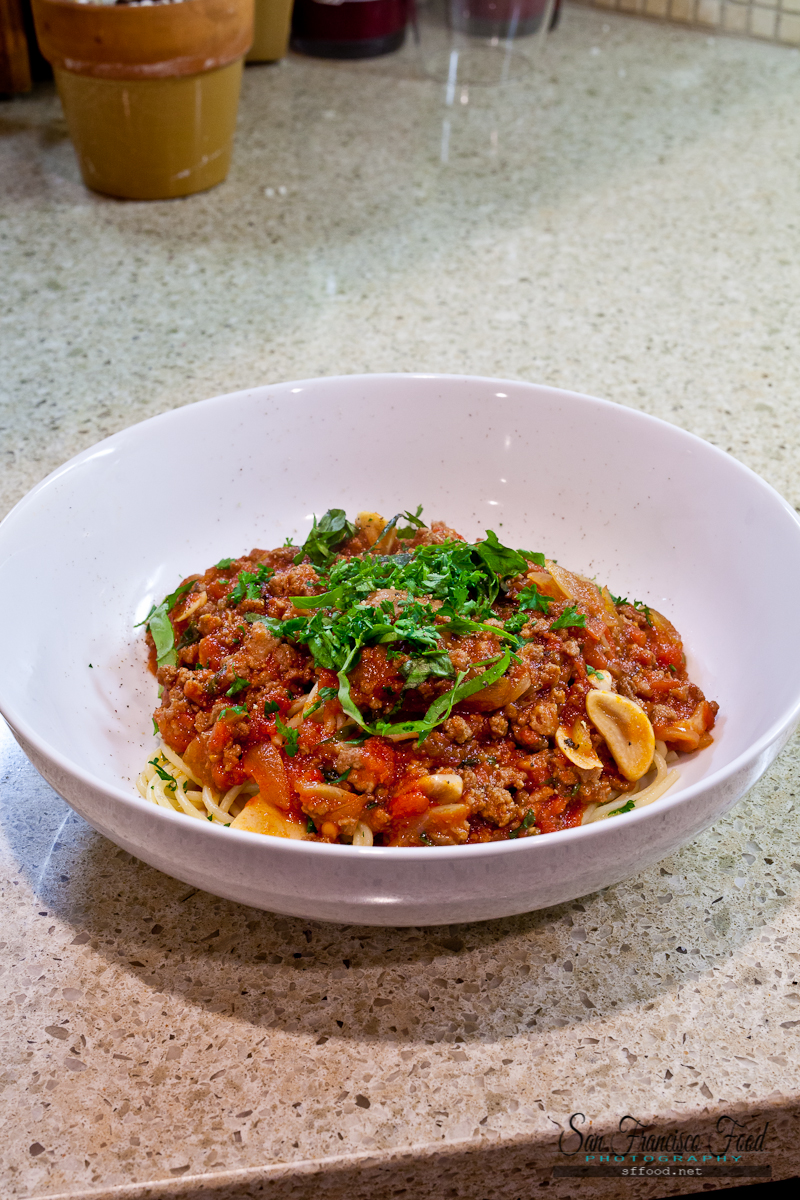 Ladle on the meat sauce, then sprinkle some sliced basil on top and crack some fresh pepper over it–and you’re good to go. 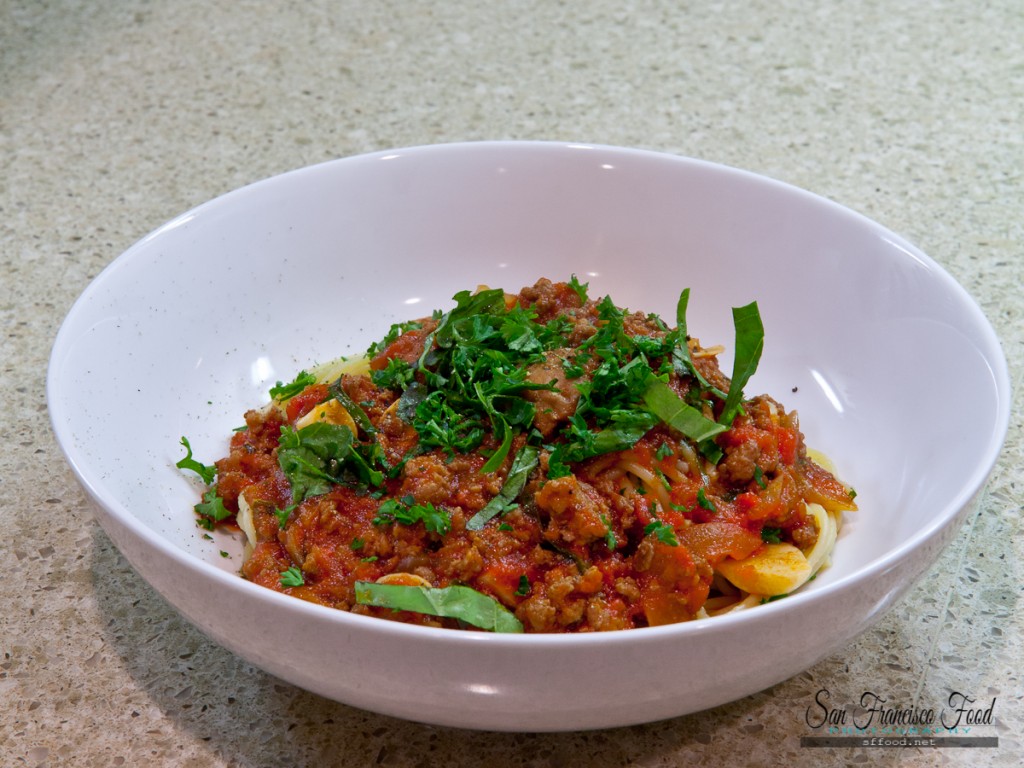 It's basically intense comfort food (who doesn't love spaghetti??) without the cheesy, oily or fatty part. Click To Tweet

Because it’s been simmered long, the flavors are really built into each bite with the sharpness of garlic, the acidic nature of the beautiful San Marzano tomatoes and the denseness of the beef where every ounce of flavor has been pulled out. Just make some garlic bread, pour some delicious red wine and you’re good for the night.