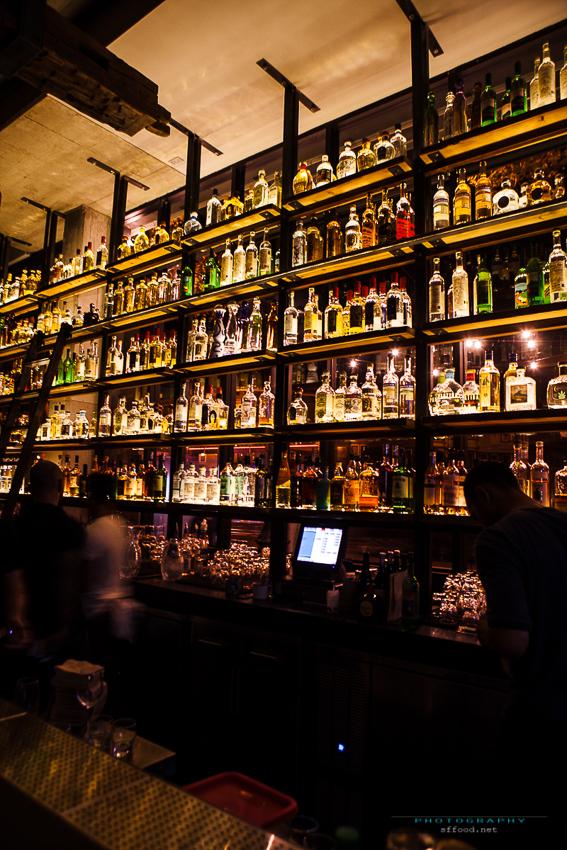 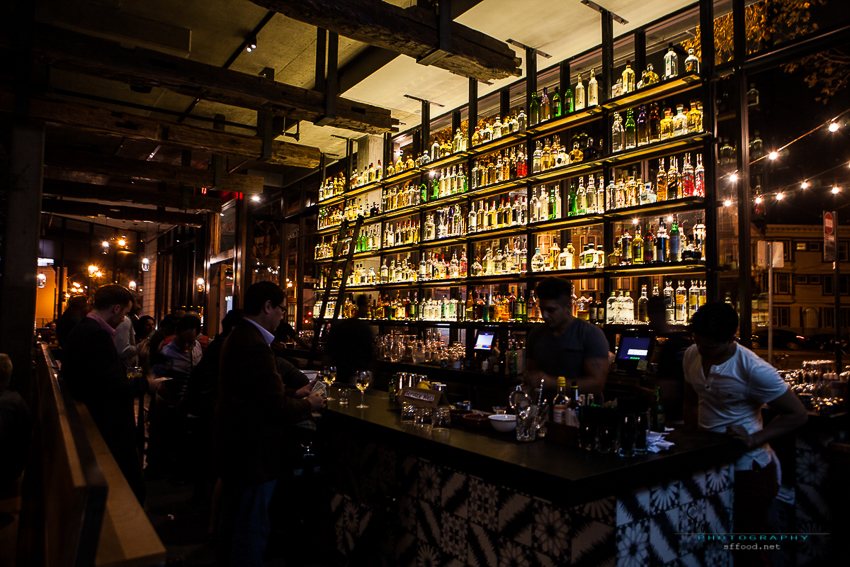 In my neverending visits to new restaurants–and goodness knows San Francisco has MANY–there’s bound to be some that I don’t like. Just as certain as I am of that, there’s also bound to be one that simply shines. 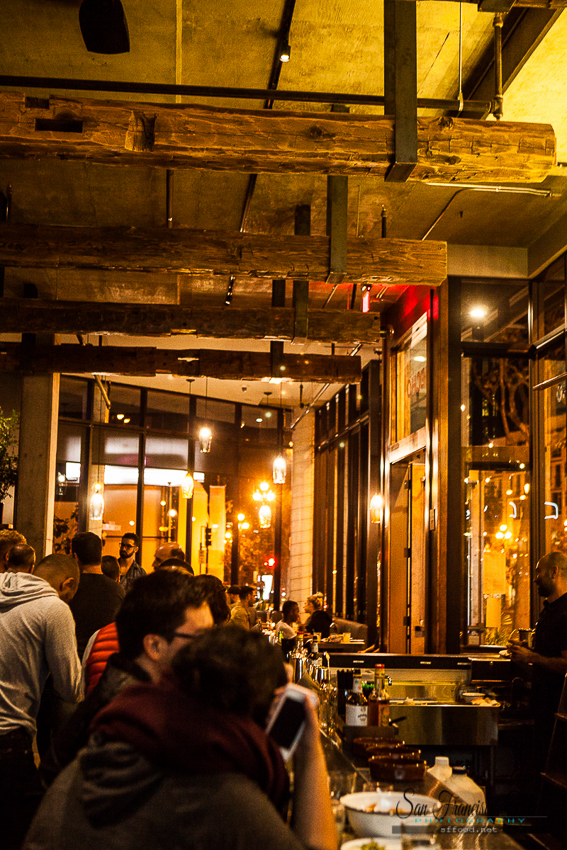 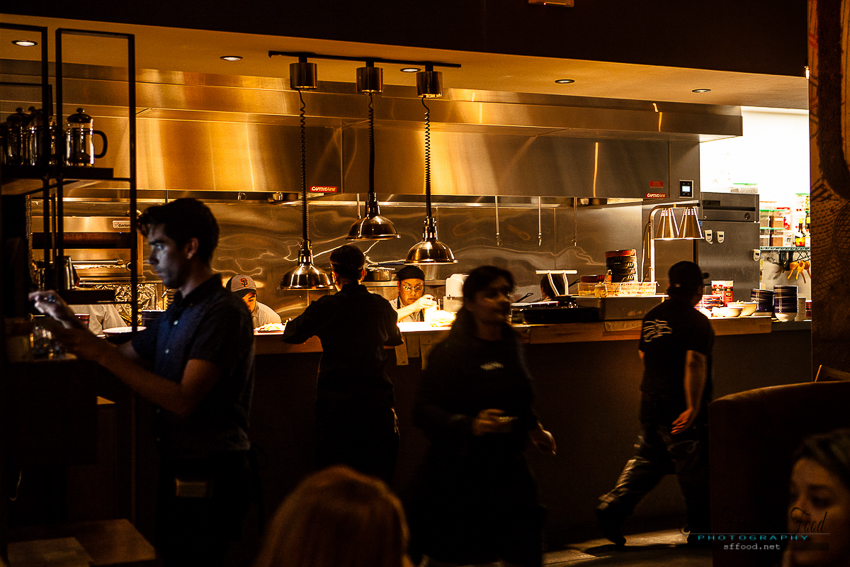 In the San Francisco food scene–taste reigns supreme. Restaurants can’t stay open and pay the premium of renting space in this city if you don’t have taste in your food. Many survive for months or even years, but eventually, they will close.

Hecho in San Francisco offers what most would technically consider to be Mexican food. The restaurant is striking with murals on the wall, a semi-open kitchen that bustling, a beautiful wall of imbibes with gorgeous lighting and wooden beams across the ceilings. New as it may be, it was crowded on a Friday night with almost every table filled when I arrived at 7:30 PM a few weeks ago.

Having been invited and not particularly being a fan of Mexican food, I was impressed with the service and the aura of the restaurant. But a taco is a taco is a taco in my book, and if I have a craving for Mexican food, I’m more likely to head to the Mission had grab something at one of the more authentic joints there. To say I wasn’t expecting much from the food would be an understatement. 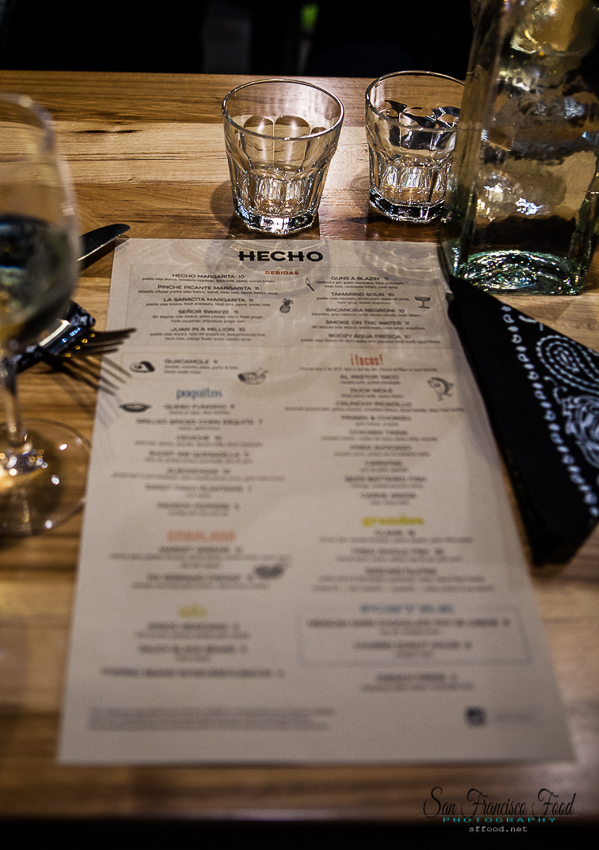 While each table at Hecho had a bright spotlight above the table, the lighting was just sufficient for my needs. But I setup my tripod in what was probably the brightest corner and sat down at a two-top with Mr. K, my camera-bag-and-tripod-carrying-man, and my #1 dinner companion at these things. I couldn’t help but think that as of late, it must be not very fun eating with me at restaurants.

The Food at Hecho 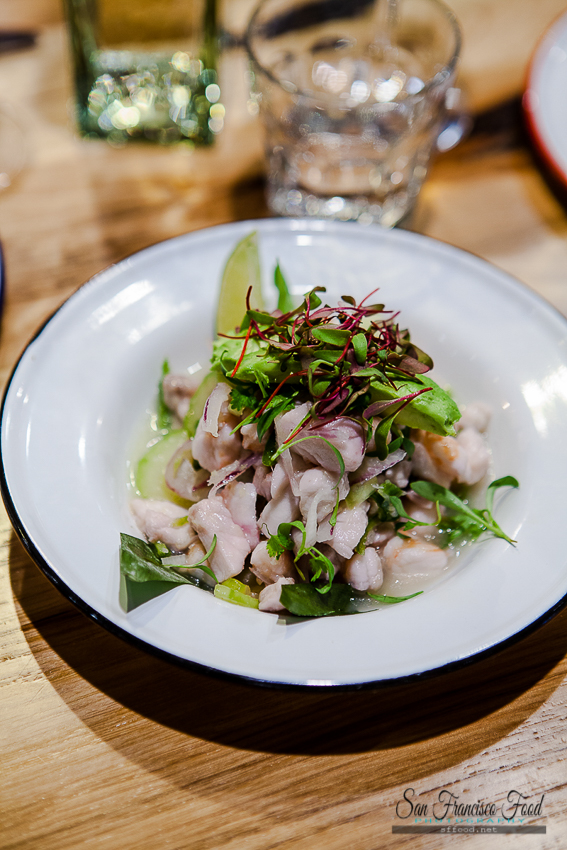 First up was the ceviche. Offered under the “Poquitos” section of the mene, aka “small bites,” the ceviche was priced at $10. Consisting of white fish, shrimp, avocado, chile and a citrus vinaigrette, it was spot-on in terms of how “cooked” the seafood was, and with little bites of the avocado, it was quite a delightful start. 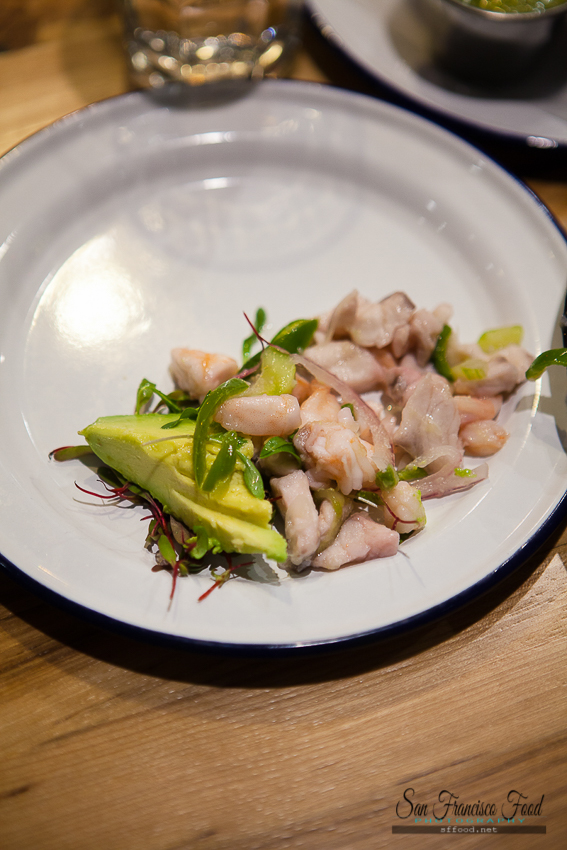 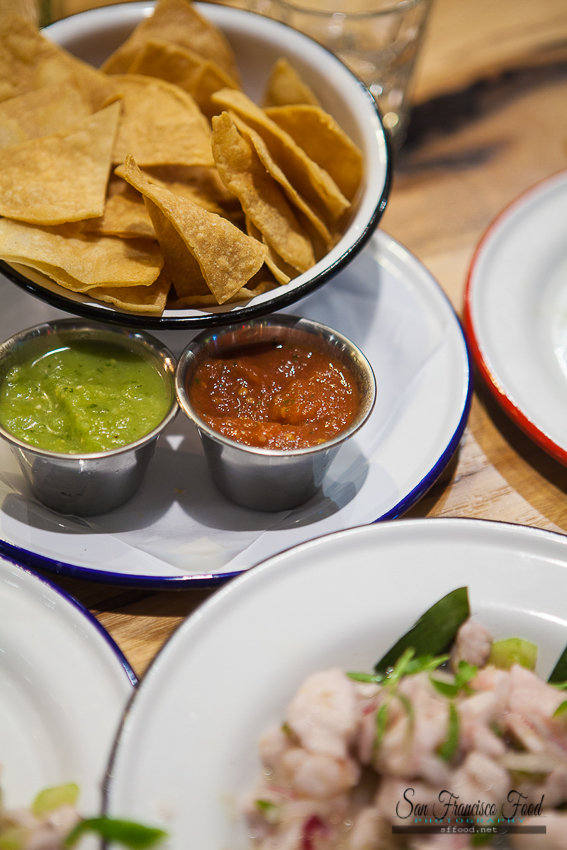 Served at the same time as the freshly fried chips with a delicious guacamole, the combination of some seafood atop chips with a sprinkle of salsa was a vibrant start to the meal. The sour notes in the ceviche served as a great palate cleanser to kick off your meal. 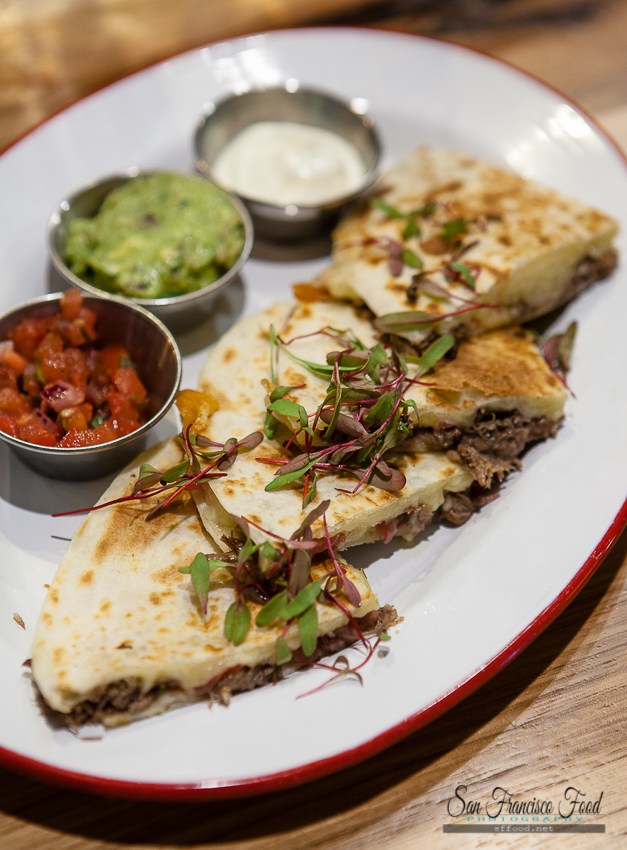 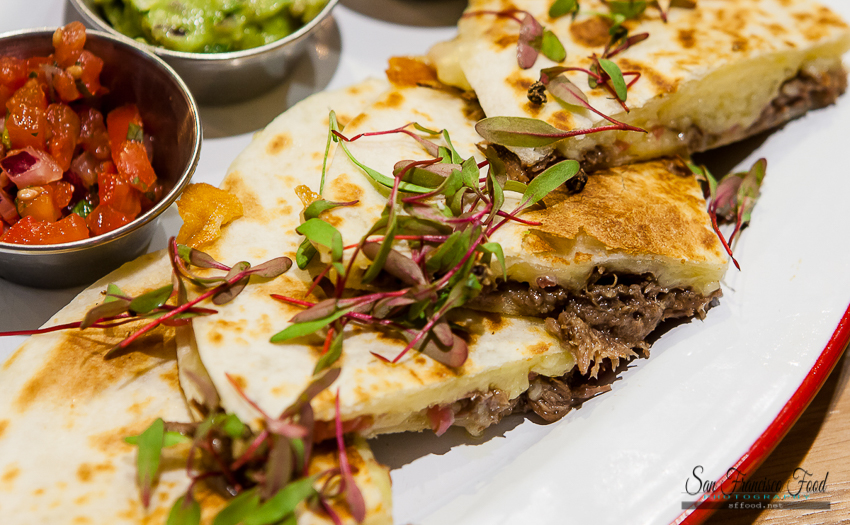 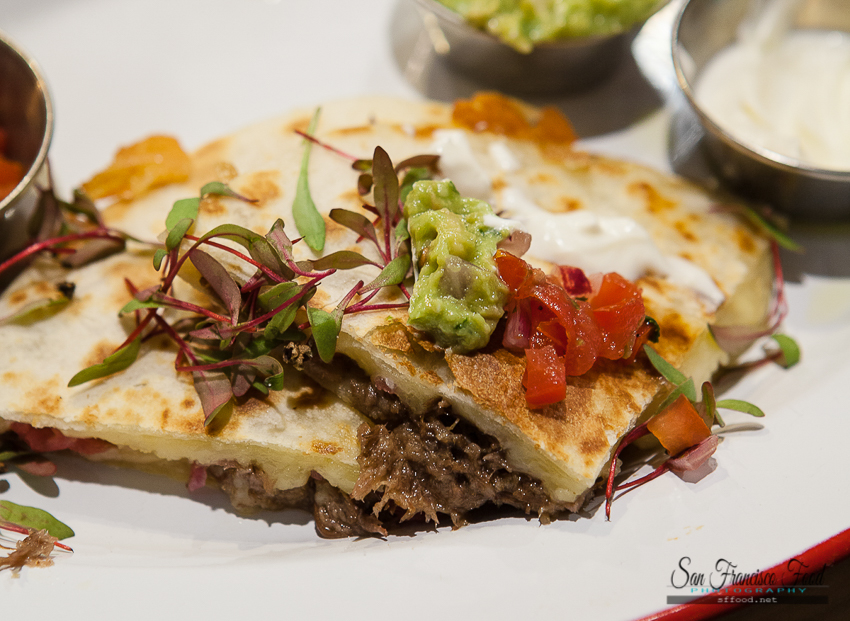 But the ceviche couldn’t hold a candle to what was next.

Very little in life holds a candle to what came next, actually…..the short rib quesadillas were spectacular.

At $11, I would seriously consider ordering two of these for myself and go to town. The rib meat is so incredibly tender but with the tanginess of the pickled onions, the flavors in the meat simply shined. I don’t know what they did to the pickled onions to make them taste like mangoes! It was a flavor that became uniquely sweet with a good depth and a lingering effect long after you swallow a bite of this quesadilla. The combination was buttery perfection. Topped with a little bit of pico de gallo and guacamole, this was my second favorite of the evening. 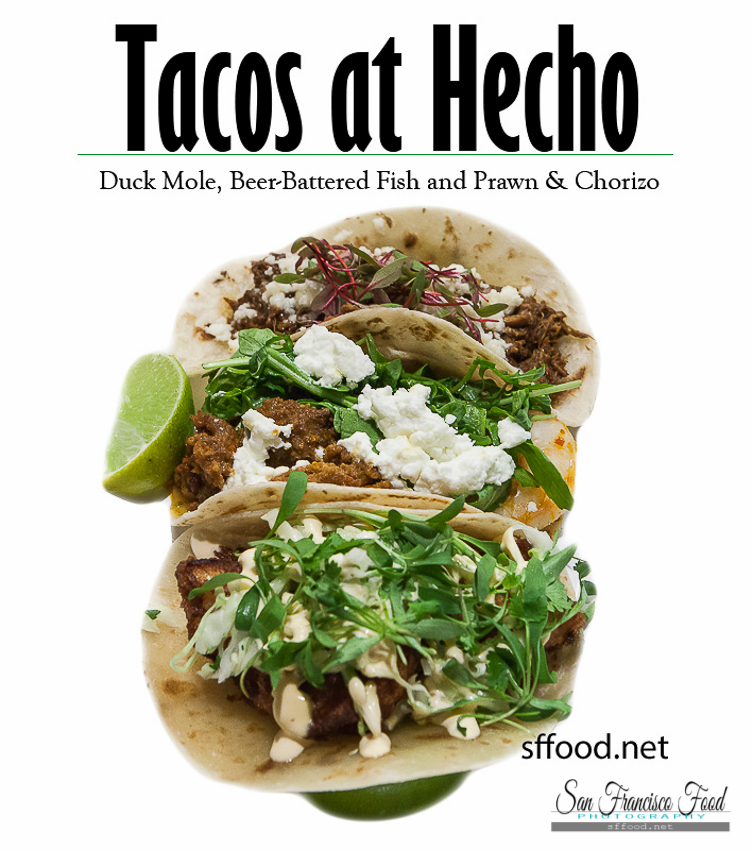 I decided to skip the salads at this dinner and moved onto the taco section of the menu. Each taco is $5 if you order two, and you can add a third for $4. So, for three tacos, it’s $14.

Wanting to choose three, I skipped the al pastor or typical carne asada, and chose the more interesting ones: beer-battered fish, prawn and chorizo, and the duck mole….after all, would can refuse a taco with duck meat? 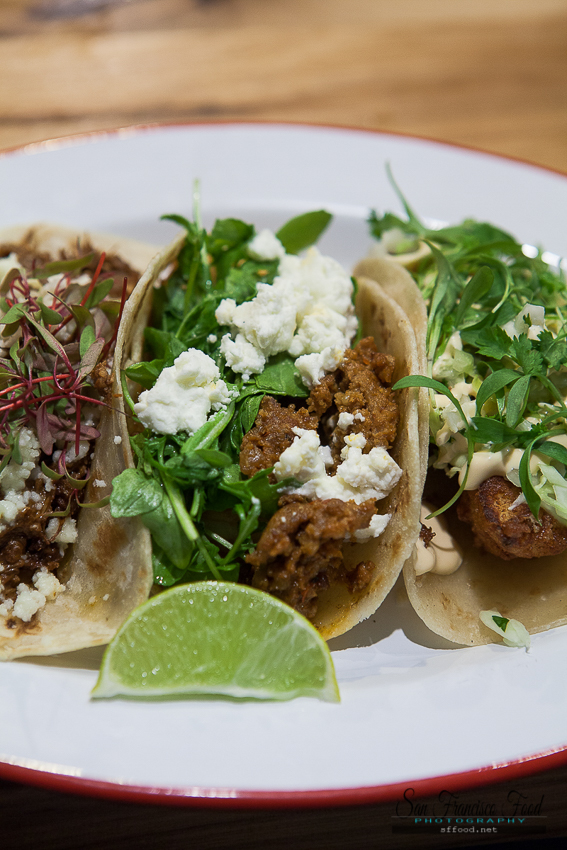 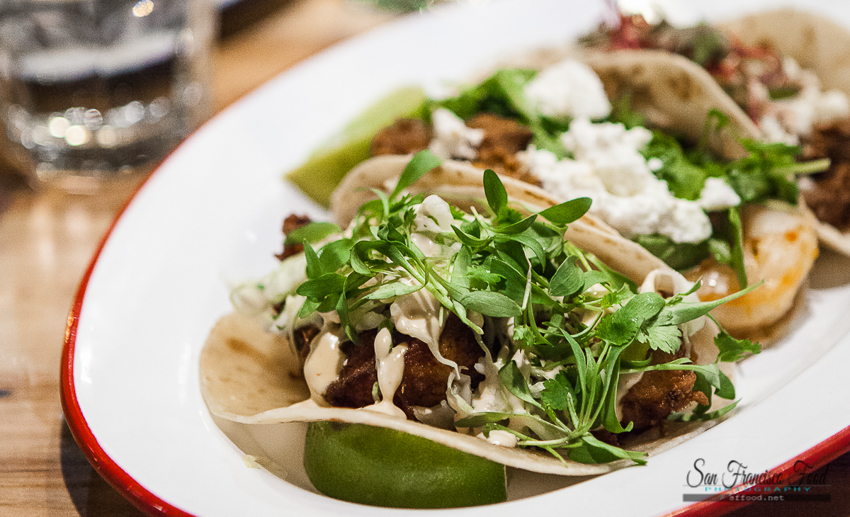 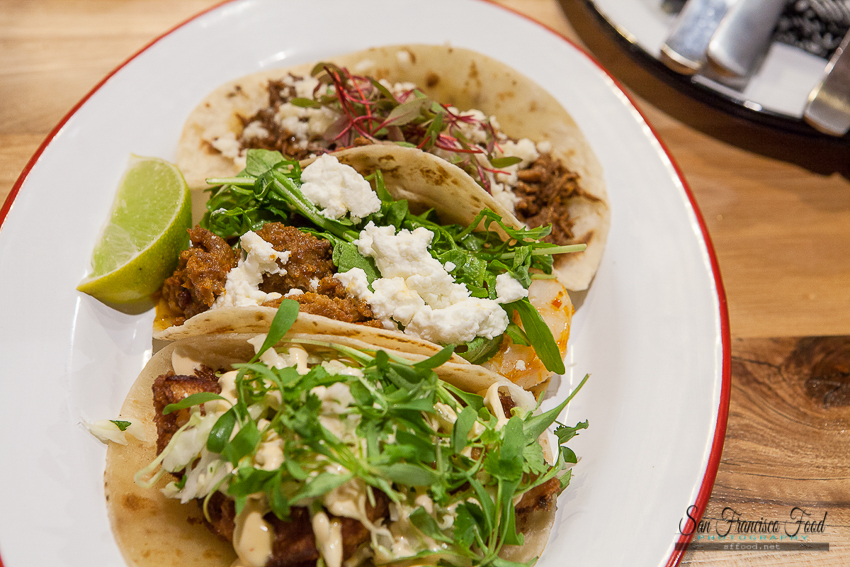 All were tasty, but hands down the best was the fish. Crispy-fried and still wonderfully warm, the fish taco made the duck mole taco pale in comparison. The duck was too sweet and reminiscent of Asian flavors–which just doesn’t jive with the taco concept. The prawn and chorizo excelled in concept and very well may have been outstanding if it weren’t so salty and over-fried.

But the beer-battered fish tacos — mmmmmmm.

Having said that, for what it is — $14 for 3 medium-sized tacos is a bit too much, in my opinion. There’s no world where this dish is worth more than the stupendous, mind-blowingly delicious quesadillas! 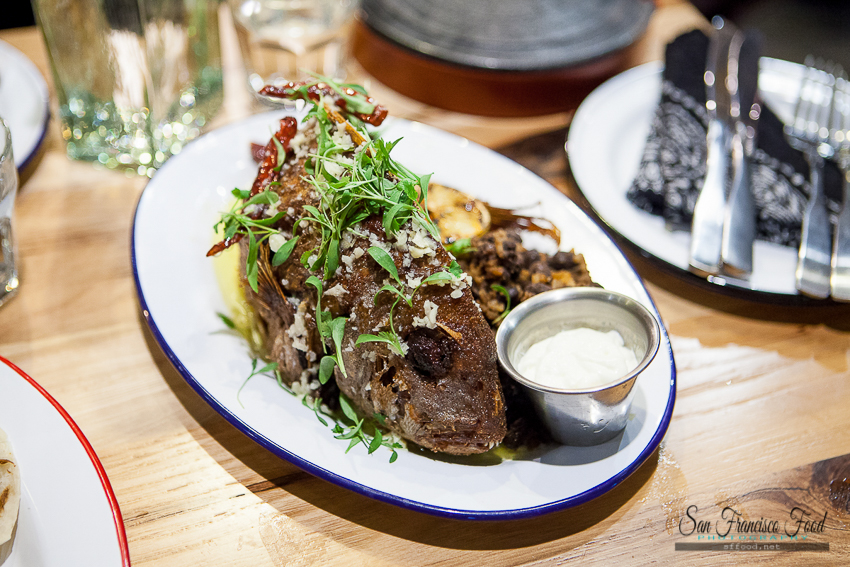 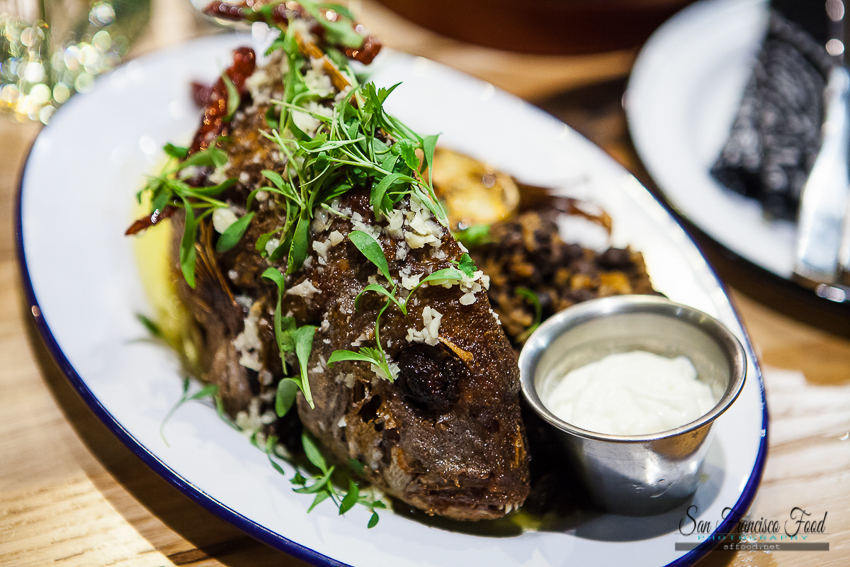 I wanted to try at least one dish from the “grandes” section, or entrees, really. There were only three choices: clams, fajitas or whole fish. Given that choice, I’ll always opt for the whole fish. Presented beautifully, the fish of the evening was a tai red snapper — a fish I enjoy very much raw as sashimi, but it doesn’t quite retain its flavors when cooked. That opinion didn’t change at Hecho on this evening. While nicely fried and beautifully garnished, for $25, the dish was lackluster.  It was served with warm tortillas, but the combination of this fish with the slightly sweet black bean mash with bits of rice didn’t really do it for me. I just didn’t understand the dish. The sour cream did bring the dish together to some degree, but I should have ordered the clams. 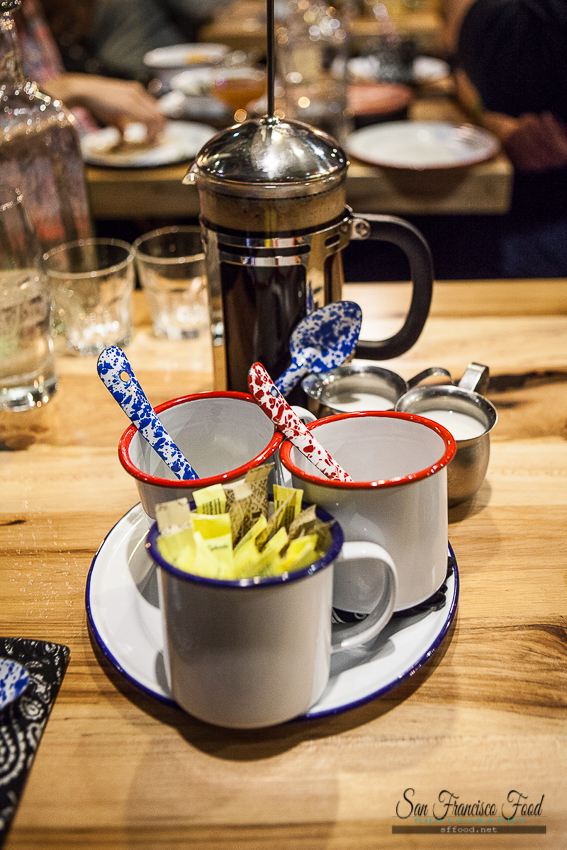 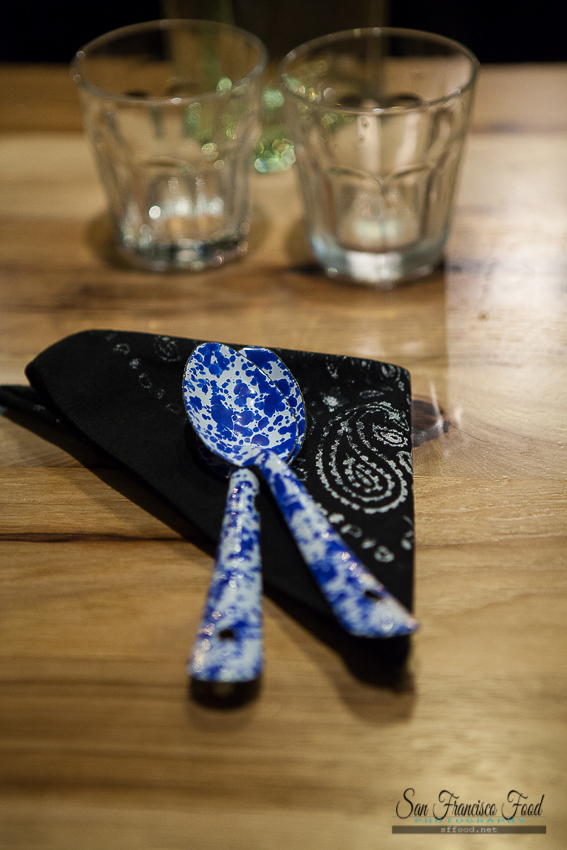 If the fish was a tad disappointing, my tastebuds were about to brought back full-force.

Only two desserts were offered on the menu and both sounded wonderful. One was a Mexican Dark Chocolate Pot de Creme with sea salt and whipped cream–hard to refuse but the “Churro Donut Holes” was hard to not order. So we opted for the latter. 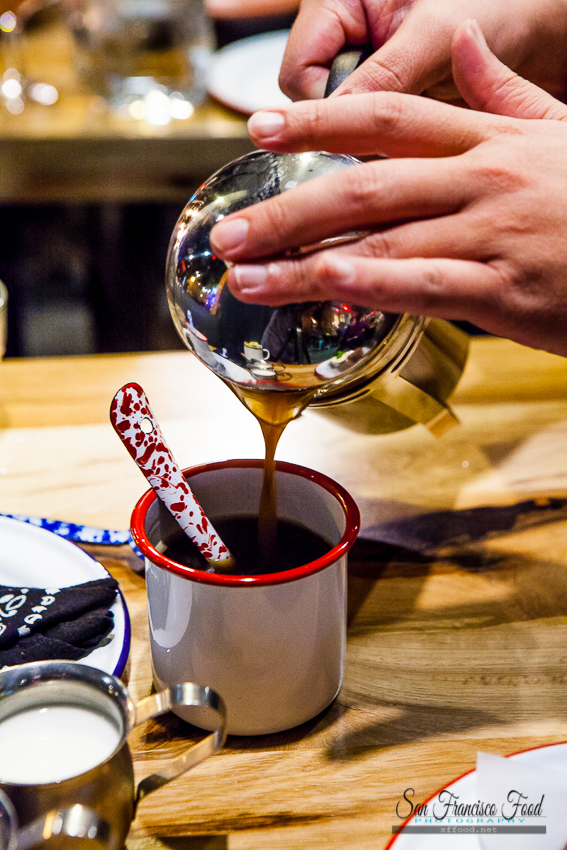 But first, let me go into the fact that Hecho serves STUMPTOWN COFFEE! I haven’t seen Stumptown Coffee served in San Francisco, or anywhere outside of Oregon, actually. As someone who lives and breathes for good coffee, I was over-delighted at the prospect of having good coffee with this meal. Seeing that it was served as French press coffee, I may or may not have squealed at the table.

But let’s cover my #1 favorite item of the evening. 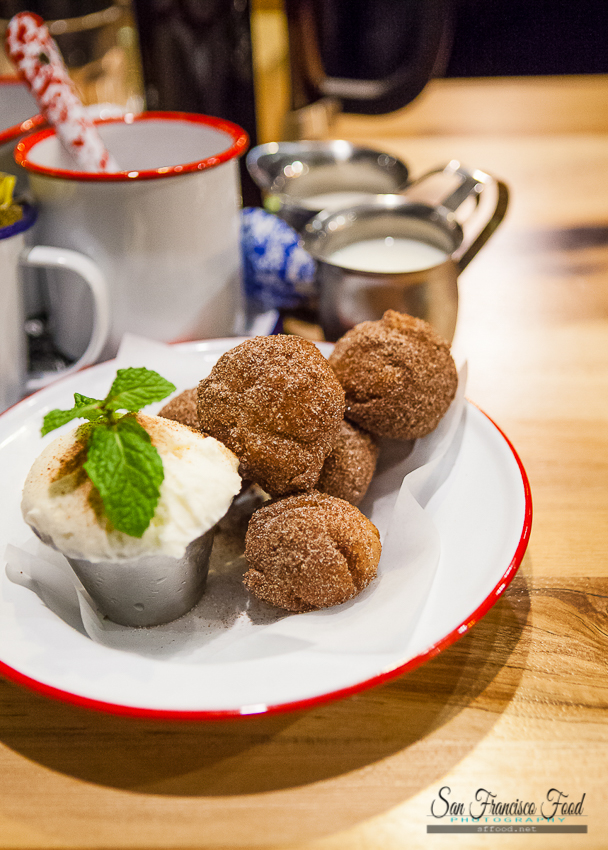 Good God, that was good.

As mentioned, it’s been over three weeks since I ate at Hecho. I kid you not — there hasn’t been one day where this dessert dish didn’t cross my mind since that evening.

Despite the adorable plates, mugs and utensils — the churro donut holes emerged looking….dull. They weren’t pretty or very dessert-esque, and the blob of cream with a mint on top wasn’t all that either. Still, I was happy with my coffee and after one sip, tore off a piece of the churro donut and dabbed some of this cream on it, and plopped it into my mouth.

And this was us:

The cream is just the right balance of sweet with some nuttiness, or amaretto-like flavors. The donut balls are perfectly chewy, sweet and with the cream and the Stumptown coffee, the combination was so beautiful and harmonious.

Seriously, to this moment, I think of Hecho’s churro donut holes.

Overall, it was a really pleasant and delicious dinner. While some were clear favorites and others, compared to my favorites, were not as tasty, each dish introduced new flavors and experiences.

The service was ideal in that our server really left us alone. If we needed something, she pretty much tended to it before we asked for it — but in general, she let us dine on our own, which is great.

From the owner to every bartender and server we encountered, I thought Hecho operated seamlessly. It doesn’t have that awkward feeling some new restaurants will have. Between that and the food, I can’t recommend dining at Hecho enough. It’s definitely a welcomed newcomer to the San Francisco dining scene.

But that quesadilla and churro donut holes with Stumptown coffee. I mean….are you SERIOUS!?!

Hecho is located at 2200 Market Street in San Francisco. You can visit their website for more information.